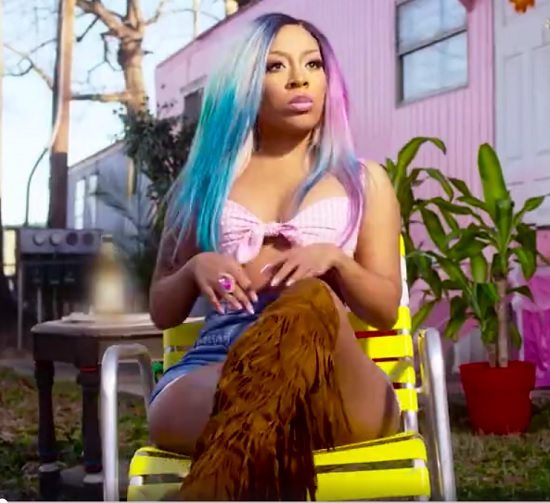 K. Michelle has never been known for her subtlety, so it came as no surprise that singer and reality TV star came for the necks of anyone who thought they would check her with her single "Mindful." With lyrics like, "Who the f**k told you hoes to open up?" and "F**k that n***a, f**k that b***h that he wit," it's clear that K. released the track with no intentions of pulling any punches.

For the track's video, the singer goes full on trailer park to get her point across. She dons a wig with rainbow-colored highlights, booty-huggin' short-shorts and pink gingham bra top as she and her girls kick it in front of a pastel pink trailer and pour up some brown liquor. But just as they think it's going to be a beautiful day in the trailer park, here come the local ratchets trying to stir up some ish. Rather than back down, though, K. confronts the problem directly as she and her girls walk right up to the uncouth ladies and show them that they come from a tribe called Checkahoe. While the short, colorful clip doesn't feature song collaborator T-Pain, it's still pretty fun and represents K. Michelle and her brand quite well.

Get a load of the clip right here and be sure to pre-order her upcoming album More Issues Than Vogue, which arrives on March 25th.

Check out the world premiere of my video "Mindful" off of my upcoming album #MoreIssuesThanVogue <3A special thank you to VH1 and Love and Hip Hop: AtlantaPre-Order the album here: http://smarturl.it/MITVStream the playlist here: smarturl.it/streammitv#MITV will be avaialble on March 25th!


TAGS:  K. Michelle, t-pain
Previous: Morning Soul: I Made It Over Next: JMSN Has A ‘Good Ol’ Case Of The Blues’ In ‘Cruel Intentions’