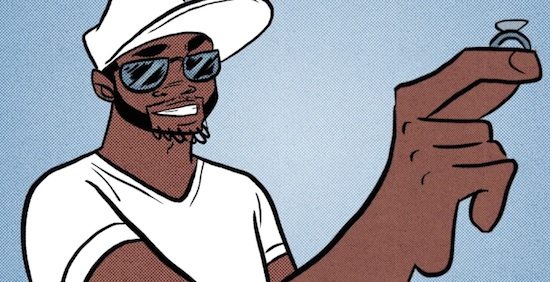 With his new album less than three weeks away from release, Musiq Soulchild's "I Do," the first single from Life On Earth, is holding firm in the top 15 of Billboard's Adult R&B chart. The song about settling down and finally putting a ring on it has resonated with Musiq fans, and the music video has endeared itself as well. In the event that you need another reason to fall for "I Do," there's now an animated lyric video to be smitten with.

Directed by Musiq Soulchild alongside Slick Lo and illustrated by Sean Mack, the animated clip follows the singer and his lady to LoveLife Couples Counseling. There, they sit down with a therapist and air out their relationship via the song's lyrics. In the end, their problems aren't enough to keep them apart, and Musiq produces an engagement ring out of his pocket. It's cute and sweet, but for a lyric video to be released after the music video has already come out seems to be a little backwards and could have less than its intended impact. Nonetheless, this carton short will come in handy for anyone who needs a visual aid to sing along with or the courage to say "I Do" and work it out with their loved one.


TAGS:  musiq soulchild", Sean Mack, Slick Lo
Previous: Kenny Lattimore Serves Up A Soulful Serenade In ‘You’re My Girl’ Video Next: Morning Soul: Do What You Want But Move Every Muscle