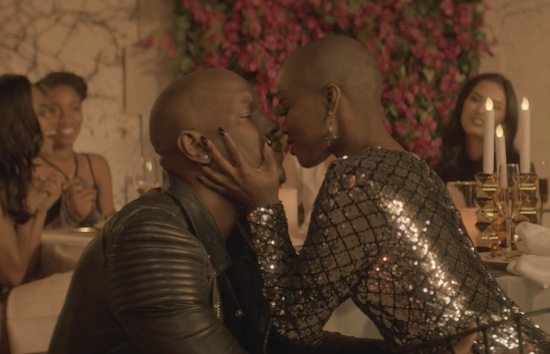 While Tyrese has been spreading the gospel about supporting real R&B and giving women advice on his talk show It's Not You, It's Men, he's also been working on a short film. He just released the official trailer for The Black Book, a full-length short he wrote and directed featuring three music videos for songs "You Can't Break Me," "Waiting On You" and "Prior to You" featuring former TGT brethren Tank. Before you press play, you should know The Black Book tells the dramatic and exaggerated love story of Tyrese and his significant other, played by songstress V. Bozeman. We're giving you the premise because it's a little hard to tell from the trailer, which presents a blend of the videos and narration that is pretty disjointed.

Tyrese and V's chemistry jumps off the screen as we watch them fight, love, fight some more and do other things that constitute a pretty terrible relationship that inexplicably leads to marriage. At the one-minute mark of the trailer however, V starts singing and we emit a sigh of relief until we realize there's still more of the trailer to get through. The short could easily serve as "When A Woman's Fed Up" 2.0, just not a great follow up nor one that anyone requested. Luckily the short features great music we enjoyed from his album Black Rose, and V. Bozeman has a voice that we can listen to any day or time.

Tyrese has released a short film before, enlisting the help of Denzel Washington to produce the visual for "Shame" featuring singer Jennifer Hudson. Perhaps he could've called Denzel for a little consult for The Black Book, but we'll let you be the judge. Tyrese's short film debuts on March 27th on Easter Sunday, and while it may not be entirely family friendly, you can enjoy the music at least. Speaking of music, you can still get Black Rose wherever CDs and digital albums are sold and find more of Tyrese on OWN where you can catch him and Rev Run on It's Not You, It's Men.