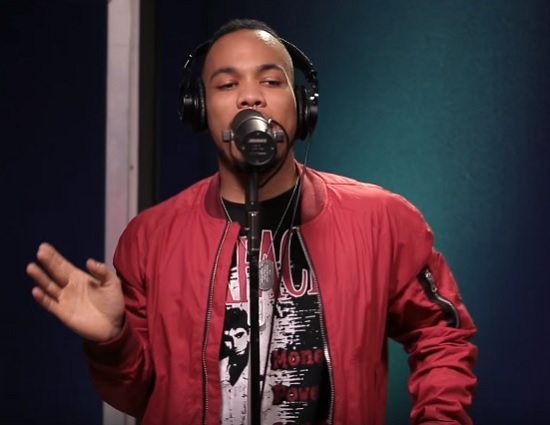 Anderson .Paak has been on fire of late, hitting the festival circuit pretty hard, making his television debut, collaborating with the likes of TOKiMONSTA and Snakehips and, of course, kicking of the year with the release of his latest album, Malibu. And just when you thought he might give it a rest, the "Silicone Valley" singer takes over yet another medium: radio. The singer/songwriter stopped by KCRW's Morning Becomes Eclectic to deliver a couple tracks from Malibu and wowed in the process.

Anderson, flanked by his band The Free Nationals, brought two Malibu tracks to life: the disco-ready jam "Am I Wrong" and the fiery "Come Down." "Am I Wrong" sounded almost exactly like the record, with Anderson capturing the song's fun-loving nightclub feel for the early morning audience. Encouraging everyone to get up out of their seats ("You might be in your office, go ahead and jump on your desk. You don't need that job," he says before the groove kicks off). And before the song is done, he once again shows off his drum kit skills, hopping on a set to bring the jam home. For "Come Down," Anderson stays behind the mic while rap/singing the guitar-laced jam as The Free Nationals keep the groove thick and heavy.

It might be a little early in the day, but you might as well get the party started with Anderson right now. Check out both performances below (and feel free to jump on your desk if you really don't need that job).


TAGS:  Anderson Paak, The Free Nationals
Previous: Morning Soul: If You Put It Down, Maybe We Can Fall In Love Next: SoulBounce Exclusive: Captain Supernova & Natasha Agrama Are ‘Searching For Forever’