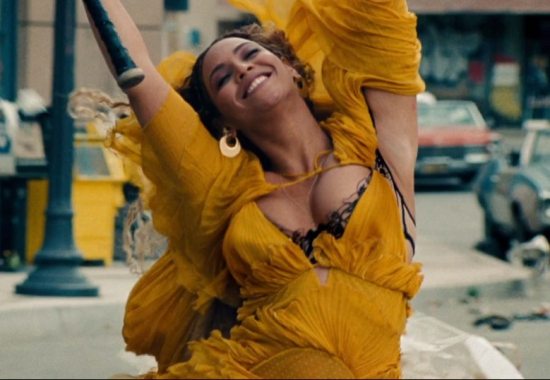 Beyoncé always knows how to create a conversation. Though we all knew something was coming from the singer sooner rather than later after she dropped "Formation" and then usurped the Super Bowl halftime show during what we deemed the blackest Black History Month ever. And then, after two months of no word other than the knowledge that her Formation World Tour was starting soon, Bey dropped a mysterious trailer for something called Lemonade that would premiere on HBO this past Saturday. Now we know that not only is Lemonade another collection of visuals from the fan-proclaimed Queen Bey, but it's also the celebrated singer's sixth solo album. And, like all things Bey these days, it took the world by storm.

Before we begin discussing Lemonade, we should preface that this isn't an album review, as with recent events and the album's sudden release, we haven't had a chance to fully process it all. But we'd be remiss not to at least mark the passing of the event. The visual album's film component, an hour-long artistic vision, is without a doubt a spectacle. It finds Bey exploring imagery and themes that the singer has only hinted at in the past and definitely confirmed that the "Formation" video was just the tip of the singer embracing her blackness. Told over 11 chapters (with names like "Intuition," "Denial," "Anger," "Forgiveness," "Hope" and "Redemption") and featuring poetry from Somali-British poet Warsan Shire, the alarming and enchanting visual tells the story of a woman scorned and her process of working through the hurt. Simultaneously, it also celebrates the strength, pride and allure of black women in a deeper much more substantial way than the ladies anthems we've come to expect from Beyoncé and features a who's who of cameos, including Amandla Stenberg, Zendaya, Serena Williams, hubby Jay Z, her father Mathew Knowles, Chloe & Halle and the mothers of Mike Brown, Trayvon Martin and Eric Garner.

While the visual component is without a doubt interesting, what really has people talking are the songs themselves, especially when it comes to who exactly they may be about. Beyoncé branches out on Lemonade, delivering takes on rock, country, trap, pop and R&B, to tell a story of a cheating spouse, the range of emotions that occurs when infidelity is discovered and the aftermath left in its wake. Of course, given the subject matter of songs like "Hold Up," "Don't Hurt Yourself" and "Sorry," many fans and spectators are speculating that there's trouble in the seeming paradise of Beyoncé and Jay Z's union. One line from the song "Sorry" in particular, which calls out "Becky with the good hair," even had the BeyHive on a witch hunt for who the woman might be (an Instagram post from Rachel Roy — who has been rumored to be more than a little too close to Jay — sent the Hive into a tizzy of bee emojis on Sunday, leaving Roy's mentions in shambles). Looks like this Lemonade had enough tea in it to be called an Arnold Palmer.

While we take some time to sip on Lemonade, if you're a TIDAL subscriber, you can stream it below and catch the visuals here. If you'd rather own the album outright, you can pick it up on iTunes now.