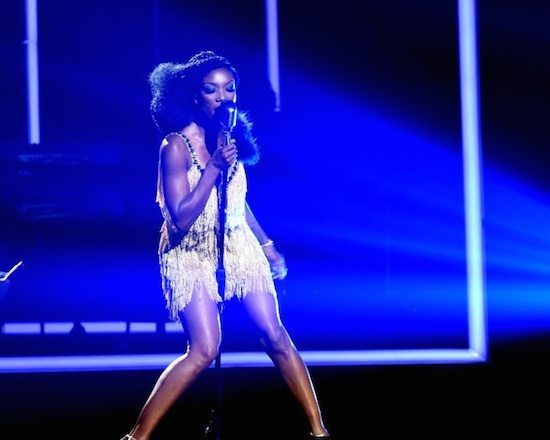 BET once again celebrated the inherent grace, beauty and power of Black women last night with another edition of their tentpole event Black Girls Rock!, and the star power was off the chain. While seeing amazing women like Shonda Rhimes, Danai Gurira, Gladys Knight and more being honored for their contributions in their respective fields, the night also yielded some knockout performances from some of our faves, including the one and only Brandy Norwood.

Despite some drama with her record label making headlines last week, Brandy didn't come to the BGR! stage to play, she came to slay! Recreating an old time juke joint meets church house, Brandy appeared in a gold fringed dress with flask in hand. After taking a long, drawn out sip, she tore into the bluesy "Beggin' and Pleadin'" with gusto. Her time in Chicago obviously served her well as she took on the role of a boozin' blues woman with vigor, serving up Shug Avery realness and giving perhaps one of her best ever televised performances to date. And, once the performance was done, her stumble and subsequent mic drop moment was sheer genius. We think it's safe to say that B-Rocka is definitely feeling herself and ready to give her all.

Check out Slayana giving the people what they want below and catch the show again win it re-airs on BET April 14th. Check your local listings for times.