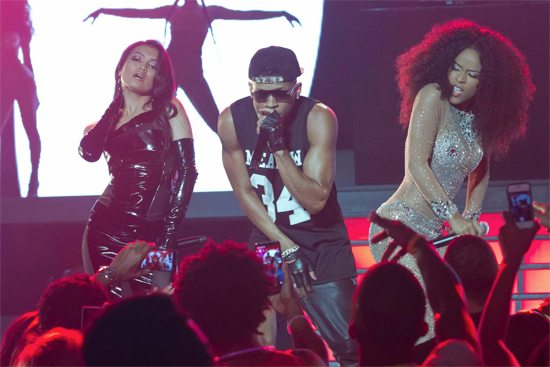 At the next Get No Better Tour stop in Baltimore, Laura invites her family and Hakeem feels some kinda way about how supportive they are of Laura's dreams. While he's in his feels, the show goes on and Tiana twerks through an almost identical performance of "Look At My Body" like we saw on last week's episode. After she's done, Laura joins her on stage in a black pleather dress and Hakeem struts out. Together they perform the new track "All Nite" and Tiana truly outshines Laura who can barely shake her cakes to the trap beat. It's comical how stiff Laura is while Tiana is damn near p-poppin' on a handstand.

Cookie is on Team No Days Off and has to work on her birthday to get Lucious video done. Jamal brings his mom some flowers and breaks it to her that he's not feeling coming to her party, because Lucious. She tries to convince her son to cut him some slack and Jamal sees that Lucious has got Cookie open again. She doesn't deny his claim, instead telling him that they have a bond that defies logic or good damn sense.

Later that night at the Lyon family mansion, Cookie arrives to find balloons and a teddy bear and she's underwhelmed that her birthday has come to this after she got her baby pink fur out of storage. She laments that Lucious ruined her birthday because he was being Lucious and ran all their sons away. Cookie spoke too soon, however, because Lucious surprises her with all her baby boys in attendance to celebrate. Jamal does his best worst Stevie Wonder impersonation singing "Happy Birthday" and playing the piano while the Lyon gang sings along.

After dinner and a cake with Cookie's picture on it, the fam settles in to watch a rough cut of the "Boom Boom Boom Boom" video. Lucious tries to stop her, but she insists. The family gathers around the flat screen to watch the video and the dramatized scenes of young Dwight and his mother give everyone pause -- especially Andre. When he sees his video grandma put a gun to her head, he flashes back to the time he did the same. He's so overcome that he gets up to turn the TV off. He asks Lucious if his grandmother was bipolar, and, ever the ass, Lucious responds that he doesn't know because he's no doctor. Clearly not satisfied with that answer, Andre presses on and Lucious comes clean that, yes, his mother was bipolar. Andre goes off because of all the ish Lucious has given him and put him over the years because of his mental problems only to find out it runs in the family. Lucious, of course, flicks off on Andre because he can't leave well enough alone and tells him that he's embarrassed by him. Ouch. They tell each other to go to hell and Andre storms out.

Hakeem rolls out, too, and goes straight to find Laura. She's leaving her latest show, and Hakeem professes how much he loves what she has with her family and tells her that he wants that, too, and he wants to start a family with her. Hakeem then drops down to one knee, whips out a tiny black box with a diamond ring inside and proposes to Laura. She says yes right as Tiana exits the building and sees the lovebirds celebrating. Tiana and Hakeem's eyes meet and it's clear that it's officially a wrap for them -- and maybe for her character, too.

The show ends with Rhonda seen walking by herself as a car pulls up. She's called her only ally, Boo Boo Kitty, to pick her up since Andre left her behind. Rhonda explains to Boo Boo Kitty what went down and that she just can't go home. Anika tells her that she can stay at her spot. Let's hope that she makes it out alive.

Jamal, Hakeem and Cookie are back in the studio, and Freda rolls through ready to hop on Jamal's track. Freda spits her verse, and it's only then that Cookie realizes that she's Frank Gathers' daughter. Cookie comes to the realization of who killed Frank in prison, and puts two and two together to come to the conclusion that Lucious aint s**t and ain't never gonna be s**t.

The plot has certainly thickened and everyone's knee deep in the drama. Next week Anika reveals that she's pregnant with Hakeem's child and that has the potential to bust up his relationship and get her face busted by Cookie, who is never here for Boo Boo Kitty's stunts and shows.