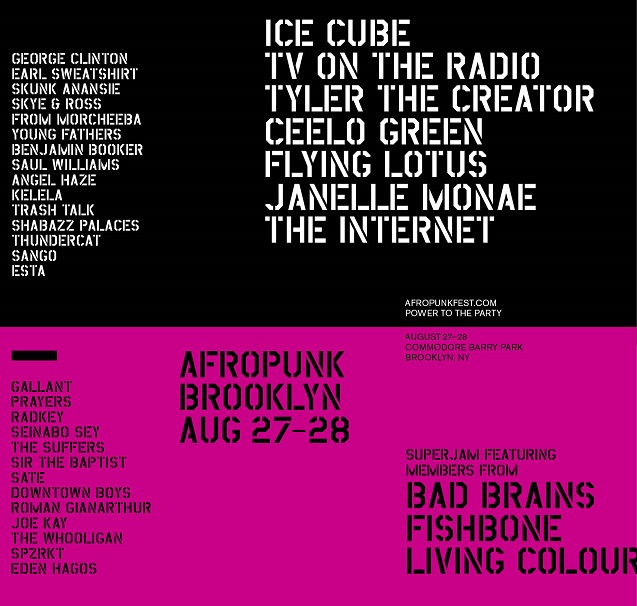 Since 2005, the annual AFROPUNK Brooklyn festival  has grown by leaps and bounds. Not only has it become one of the best festivals in NYC, but the party has expanded to cities such as Atlanta, Paris and soon Oakland. However, just because the festival has grown doesn’t mean they won’t continue to bring the heat where it all started. This year’s lineup for the two-day festival features OG rap and old school funk, alternative punk, new school upstarts, soul and much more for all the music enthusiasts out there. More than 60 acts will take the stage at Brooklyn's Commodore Barry Park on August 27th-28th for the 12th annual festival.

On August 27th, you can look forward to the musical stylings of  TV on the Radio, Tyler, the Creator, CeeLo Green, Flying Lotus, George Clinton and Thundercat. Then on August 28th, Ice Cube, Janelle Monáe, The Internet, Earl Sweatshirt, Living Color and many other acts will close out the festival.

In addition to a colorful cast of performers, AFROPUNK will also showcase more than 100 craft artisans and 25 food vendors. Keeping with their mission of not only bringing the funk and the noise, but changing the world, they will also feature original artwork and murals created in conjunction with the Art for Amnesty and Museum of Contemporary African Diaspora Arts (MOCADA). In addition, the AFROPUNK Army system will be in full effect this year, offering fans the chance to volunteer in exchange for a general admission ticket.