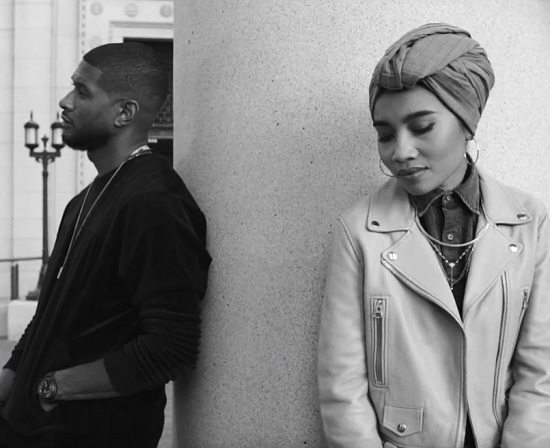 Yuna has less than a month before her upcoming album, Chapters, hits stores. She's already captivated us with the album's first single "Places To Go" (and its dynamic video) and teamed with Usher to make us swoon with the album's second single, "Crush." Now the dreamy duo have gotten back together to deliver an enchanting vision for the song's video.

The black-and-white clip captures a moment on the steps of what appears to be a beautifully designed municipal building. Two young potential lovebirds lock eyes during a chance moment and the rest of the world seems to stand still as they stare at each other, each awestruck at the other. Enter Usher and Yuna, who provide the perfect soundtrack as the world slows for the two to meet. Surprisingly, the two photogenic singers rarely share screen time in the clip, with director Daniel Carberry opting instead to show the two singing of the first rushes of love solo before showing a few fleeting moments of them together. By doing this, though, a sort of longing is created not unlike waiting to see just a glimpse of the person who's captured your heart.

You can catch the beautiful clip for "Crush" right here. And if you want to see Yuna performing live, check her out during her North American tour this spring, which kicks off April 29th in Washington, D.C. You can find other dates and ticket information on Yuna's website.


TAGS:  usher, Yuna
Previous: Morning Soul: Listen To The Rhythm Of Your Soul Next: JMSN Keeps Us ‘Hypnotized’