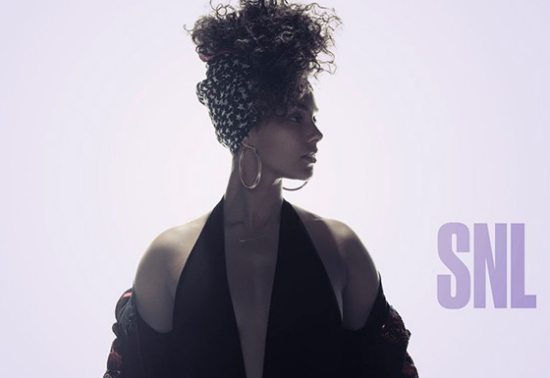 Alicia Keys gave us a shock to the system with her new track "In Common," the first single from her yet-to-be-titled sixth album. With the album set for a summer release, the singer/songwriter took the Saturday Night Live stage to perform the summer-ready jam and another new track, "Hallelujah," to get folks ready for what she's going to bring.

With her hair wrapped up in a silk scarf and a halter top with a plunging neckline, Alicia stood behind an upright piano for "In Common" as the song's tropical rhythm spilled out around her. By mid-performance, however, she got swept up in the groove, stepping from behind the piano to shimmy her shoulders and move around the stage. For "Hallelujah," a slower, more melancholy record, she once again stood behind the upright piano with her band and backing vocalists flanking around her. This time, though, she stayed where she was, emoting through her voice and facial expressions as the song's intensity built to its climactic finale.

While there isn't a hard release date set for her upcoming album, with such a high profile gig, we're sure that more info on exactly when we can expect it will be coming soon. While you wait, check out Alicia doing her thing on SNL in the videos below.


TAGS:  alicia keys, saturday night live, snl
Previous: Morning Soul: Sends Me Into Hyperspace When I See Her Pretty Face Next: Kraak And Smaak & Mayer Hawthorne Lay Down Addictive Funk On ‘I Don’t Know Why’