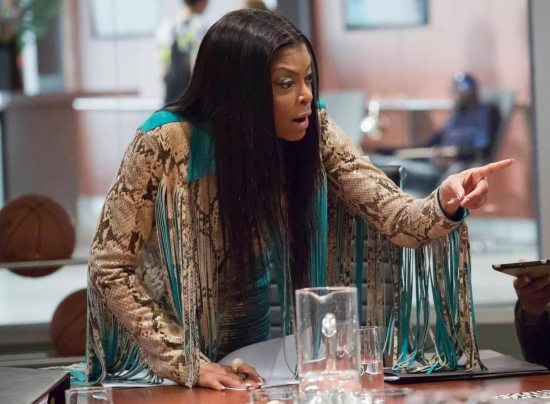 With only a handful of episodes left in its second season, the drama is starting to ramp up on Empire. Last week brought quite a few revelations, including that Lucious and Cookie would be Co-CEOs of Empire Entertainment (because that'll go well) and Andre's discovery that Lucious' mother was, in fact, alive and well. In other news, Lucious and Jamal are still feuding with the ASAs looming and Hakeem was getting ready to play family man with his engagement to Laura back on and his baby with Anika in the clear after a medical scare.

With all that drama, this week's episode was sure to be juicy. Shall we get to it?

Episode 216: The Lyon Who Cried Wolf

We open the episode inside the nursing home, where Andre is getting to know Lucious' mama Leah (Leslie Uggams) over a game of bingo. He's asking her a few questions and she seems like your run of the mill sweet old lady, but when someone else wins the game, we get a foretaste of her spiteful side. After her temporary break, though, she notices Andre's eyes and strokes his face as she asks, "Are you kin to me?"

Meanwhile, Leah's other grandsons are in the studio working on a new track for the soundtrack of Ryan Coogler's next movie — look, this is Empireland — and it has Becky with the blonde hair turnt. However, the track also needs a female vocalist and Hakeem knows who'd be perfect for the job: Tiana. While that makes sense on paper, Becky and Jamal remind Keemie that his fiancée Laura might just have a problem with that, but the young, dumb and full of nonsense rapper just can't see that happening. Alright, bruh. Cookie, on the other hand, is taking care of ASA business, meeting with D Major, the newest music director of the program. She's negotiating the special Lyon family performance at the show when fat cat Lucious, who's on a juice cleanse to get his figure back, steps in to pitch his idea of what the performance should be. Diffusing the potential argument while throwing shade her ex-husband's way, Cookie suggests they go meet Jamal, since he is the most nominated. That meeting doesn't go as planned, though, as Mally Mal ain't too keen on trading in his solo spotlight for a group performance with daddy. D Major shuts him down rather effortlessly though.

Elsewhere, Becky passes down the assistant's bible to Porsha, who thinks it's a sign of good faith. In actuality, it's a read. Becky tells the bumbling Porsha that she needs to step her game up while looking Porsha up and down like she's short and walking away. And just as Cookie steps out of her office, in struts her sister Candace (Vivica A. Fox), who's there to inform Carol (Tasha Smith) that her vacation from motherhood is officially over. Carol, who just finished rehab, doesn't think that's the best idea, but Candace ain't got time for the nonsense and simply states that Carol's babies will be joining their mother once Winter Break is done.

Speaking of babies, Jamal, still being a petulant child about his ASAs performance, storms into one of D Major's studio sessions blasting his new song with Freda Gatz on his phone like one of those annoying, headphone-less people on the subway and demanding a solo spot. Our boy D ain't having none of that. He sends everyone but Jamal out of the studio. But just when we think Jamal is about to catch a deserved foot in his ass, he instead catches the D (pun intended) as the two fellas get hot and heavy. For some reason, this scene is spliced with Keemie and Tiana in the studio working on "No Competition." After their session is done, Tiana teases the youngest Lyon about the short leash he's on before giving him a kiss on the cheek. Uh-oh.

The next morning, Cookie, Jamal, Lucious and Hakeem meet at Leviticus (seriously, do they do everything at this club?) to rehearse their performance. But instead of rehearsing, they start bickering like "a rack of bitches" (Cookie's words). The arguing ceases on Andre's arrival though, as he brought a special guest with him: Leah. Of course everyone in the family is flabbergasted, but no one is more shook than Lucious himself. This of course causes Cookie and Lucious to discuss some things, mainly how the hell his mother is still alive. He explains his side of the things, including how Leah ended up in the home. We almost have sympathy for the devil, but not much. The boys, in the meantime, are exiting stage left. Hakeem goes to be with Laura and it looks like Leah is going to stay with Andre and Rhonda — though Rhonda isn't thrilled with the idea. Leah, however, nips it in the bud by saying that she only wants to stay with her son. Inside the club, Jamal runs into D Major on the way out and tries to flirt but instead gets the cold shoulder and is left utterly confused. So are we, bruh.


TAGS:  Empire, Jussie Smollett, Leslie Uggams, Ryan Coogler, taraji p. henson, Tasha Smith, terrence howard, Vivica A. Fox
Previous: Kehlani Takes Us Through A Day In Her Life With ’24/7′ Next: Maxwell Brings His ‘Lake By The Ocean’ To ‘The Late Show’