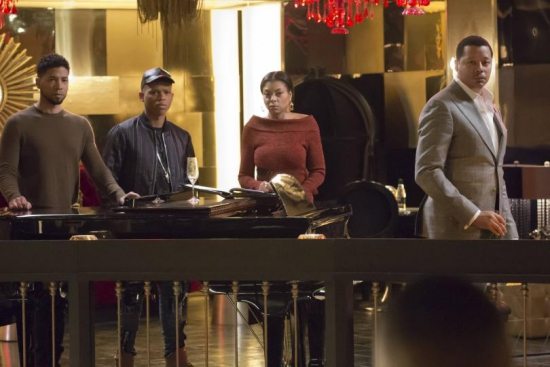 When Hakeem meets with Laura, they argue about Tiana's involvement on "No Competition." Laura is indeed jealous about Tiana being on the track, but she's also upset that she's missing out on the song's platinum potential (again, this is Empireland). Keemie tells her that the decision wasn't his — which is a lie —and assures her that he's all about her — which, knowing Hakeem, is probably another lie. Back at Casa de Lucious, the mogul is watching his mama like a hawk and instructs his staff to do the same. At the same time, his right hand man Thirsty is on the bad side of town with Harper Scott in his passenger seat. He informs her that running her journalistic mouth wasn't cool, but Harper, who apparently really doesn't pay attention to her surroundings, is defiant as ever. Thirsty lets her out under a bridge and, as she continues to yap it up, she's snatched by two of Lu-Dog's thugs as Thirsty speeds off. The night wears on and D Major pays Jamal a surprise visit at home. He's a lot more genial than he was at the club, though, because (shocker!) he's still in the closet. Though Jamal definitely wants him, he can't go for that DL ish and dismisses him. At Lucious' crib, Lu-Lu and Cookie have a heart to heart about Leah, with him again warning that his mama is far more vicious than she lets on. Cookie, on the other hand, lets him know that that he needs to get it together and make the ASA performance work.

The next morning, Candace and Carol meet for brunch as Carol pleads for more time. She apparently feels the need to make amends with Cookie for what she did with Lucious while Cookie was locked up. No, she didn't sleep with him, but she did handle his lightweight, basically making sure that his enemies fell by the wayside. Candace rightfully thinks that this isn't that great of an idea. Unfortunately, she did think that discussing illegal matters in a public setting was, and there's a snooping fella pretending to read the paper who's listening in to everything they say. He later approaches Carol as she struggles with the urge to drink at a bar. Turns out, he's her old friend Tariq. It also turns out that he's working undercover for the Feds. Uh-oh. Another uh-oh moment is happening between Anika and Rhonda as well. After Rhonda is pushed out of the way of a falling box, memories of her fall down the stairs are stirred and she remembers that she was pushed. Later that day, while having a delicious glass of wine with her new BFF Anika, she notices the flat red bottoms she's wearing and remembers that her attacker wore a very similar pair of shoes. She smartly plays it off as just her being a little buzzed when Boo Boo Kitty asks her if everything's alright, but the wheels are a-turnin'.

Lucious, meanwhile, is still dealing with his mother's crazy. It seems Leah was once a struggling singer, too, and she sits at his piano playing a song that stirs up old memories for him (though, if you ask us, the melody sounds suspiciously close to Natalie Cole's "Someone That I Used To Love"). After ruining what could've been a tender moment by harshly correcting her that his name is not Dwight several times over, Lu-Lu ends up utilizing the song's melody during the family's ASA rehearsal at Leviticus. Of course everyone thinks it's amazingly dope and Hakeem even raps a pre-recorded verse over it. Oh joy. However, it does produce a kumbaya moment for the family, which helps them come together and wow D Major when they perform what they now call "Chasing The Sky" for him and he approves the set for the ASAs. It seemingly also gives Jamal a change of heart about D, as he invites him back to his place later that night. Everything ain't peachy in Empireland, though, as Porsha (unintentionally?) sows some seeds of discord with Carol, reminding her that while Cookie seemingly has everything, Carol has nothing. Cue the dramatic minor chords and the icy stare into the distance.

Late in the night at Casa de Lucious, something is amiss. Miss Leah's been in the kitchen whipping up a host of cakes she made especially for her baby boy. But if you think this was a kind gesture, you're sorely mistaken. Wielding a sharp knife and clearly off whatever meds she was taking, Leah demands that Lucious has a slice of cake. It seems that she has a vendetta against Lu-Lu for keeping her cooped up in the home — and the fact that he was ever born in the first place. But now she's just sorry...sorry that she didn't kill Lucious when she had the chance. Well damn!

Next week, it looks like the ASAs are finally happening. Thank goodness, because all this hullabaloo about this damn awards show was starting to grate. It also seems that we'll finally get to see which Lyon will fall. Who will it be? Will we care? Will Jamal finally stop caterwauling like a billy goat? The only thing we know for sure is that we'll be right here to give you the recap the next day with another edition of Empire Watch.


TAGS:  Empire, Jussie Smollett, Leslie Uggams, Ryan Coogler, taraji p. henson, Tasha Smith, terrence howard, Vivica A. Fox
Previous: Kehlani Takes Us Through A Day In Her Life With ’24/7′ Next: Maxwell Brings His ‘Lake By The Ocean’ To ‘The Late Show’