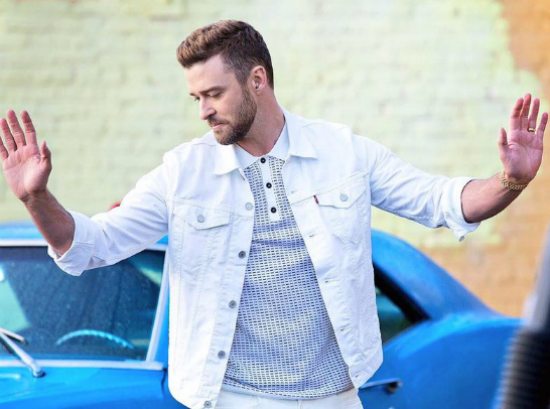 Justin Timberlake is spreading sun and fun with the music video for his latest single, "CAN'T STOP THE FEELING!" Released on May 6th, the track is a song on the soundtrack for upcoming DreamWorks movie Trolls. While he already dropped some early visuals for the tune featuring his castmates and friends, the new clip focuses more on Justin and everyday people. Directed by Mark Romanek, the video starts with Justin eating a piece of pie in a diner and his server kicking off the dance-a-thon once the music drops.

The concept itself is pretty similar to Pharrell Williams' "Happy," as each scene features diverse people -- construction workers, a flower store owner, barber, a girl doing her laundry and more -- catching dance fever. During the breakdown of the song, Justin leads the group in some simple choreography we can all do at home, you know, if we did that sort of thing. The video ends with every dancer getting a shout out with their name on the screen, including Justin who leaves us with a cheeky grin.

The Max Martin-produced track provides all the happy vibes we need to end a bad day. While "CAN'T STOP THE FEELING!" is available for streaming now, the Trolls soundtrack drops a little later this year on September 23rd. You can catch the likes of Anna Kendrick, James Corden, Icona Pop and Zooey Deschanel on the project, and don't miss Justin as he voices a lead character named Branch when the film premieres on November 4th. Until we get more from the cast and more loosies from the Trolls soundtrack, watch Justin and company bust a move in "CAN'T STOP THE FEELING!"