Maxwell Brings His ‘Lake By The Ocean’ To ‘The Late Show’ 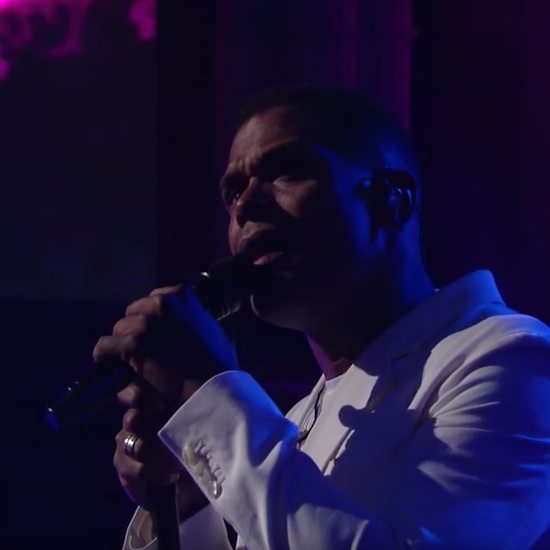 It's been an entire seven years since Maxwell performed original material on TV, but he ended the drought last night when he brought his "Lake By the Ocean" to The Late Show with Stephen Colbert. The single from his much anticipated album, blackSUMMERS'night, is just as smooth as the crooner, and we couldn't wait to see it performed live. Backed by his all-star band including LaTina Webb, Derrick Hodge, Kenneth Whalum and Keyon Harold, you could tell Max was excited to perform when he opened his mouth. While his throat sounded a little parched on his first (and final) note, he delivered a passionate performance while decked out in his finest white party suit. The purple and blue lighting and background harmonies all set the mood for an overall smooth entrance back onto the late night circuit for Maxwell.

If you recall, BLACKsummers'night (aka BLACK) dropped back in 2009, so when we say we're waiting on Maxwell's new album, we really mean it. Thankfully we won't have to wait too much longer since blackSUMMERS’night (aka SUMMERS) will be released on July 1st. Maxwell is also taking his show on the road with his SUMMERS' Tour, which kicks off June 18th in Washington state and ends August 7th in Florida. Watch Maxwell's performance of "Lake By The Ocean" below, and get ready to experience a flood of feelings when you press play.


TAGS:  Derrick Hodge", Kenneth Whalum, Keyon Harold, latina webb, maxwell, The Late Show with Stephen Colbert
Previous: Empire Watch: Vicious Like A Lyon & Crazy Like A Fox Next: The Family Revisits ‘Nothing Compares 2 U’ In Memory Of The Incomparable Prince