TWENTY88 Keep It ‘Way’ Hot On ‘The Late Late Show’ 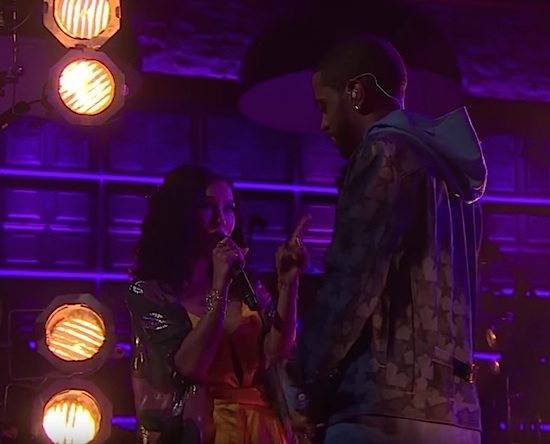 Jhené Aiko and Big Sean steamed things up for late night television when they hit the stage on The Late Late Show with James Corden to perform their song, "On the Way." The duo formally known as TWENTY88 were perfectly in sync as they ran through the vibey track from their self-titled debut EP which dropped earlier this year.

While separately the two artists do little to capture my attention, together I think they've hit pay dirt. The chemistry between them is off the charts on the project and is none the more obvious as they go verse for verse in this clip. Either something is definitely going on between the two or they have a great marketing ploy on their hands. Of course, the "are they or aren't they" question is made all the more interesting considering the fact that Aiko supposedly married producer Dot Da Genius. However, within days, the Instagram post where Dot seemed to reveal the secret marriage had been deleted and then the TWENTY88 project dropped. Look, I'm not one to wish for the demise of a presumably happy home, but the result of whatever is going on between Aiko and Sean has been music to our ears. Admittedly, the mysteriousness of it all plays a huge role in what makes this pairing so intriguing. Peep the clip below and see if you can decide what's real or not.