Beyoncé Makes It Clear That She Ain’t ‘Sorry’ 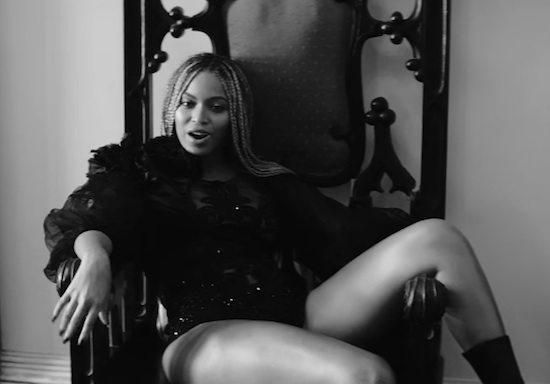 Call it the track that launched the hunt for Becky. Way back in April, Beyoncé dropped another bomb on the world with the release of her visual album Lemonade. The set sent many of her fans, BeyHivers and fairweather alike, into a tizzy. While the entire visual, which she premiered on HBO, was thought-provoking, the section that set tongues a-waggin' was the portion for "Sorry." If you happened to miss the internet-breaking clip, Bey's got you covered, as she's officially released the video for the song for your viewing pleasure.

The black-and-white visual is all about the woman scorned. But rather than break down in tears and wonder why her wayward lover doesn't love her, she's defiant and firing back. To do that, she fills up a bus with decorated dancers, takes them to a plantation-style house and employs tennis great Serena Williams to twerk as she delivers an acid-tongued kiss off. After poetry provided by Warsan Shire, Bey launches into a tirade against her hubby (it's your call whether it's actually Jay Z or not) as she puts him on blast for his cheating ways. And just in case you wonder if she regrets what she's saying, she reinforces her stance with a simple, "I ain't sorry."

Of course, what everyone latched onto was the song's final line, in which Bey tells her man, "You better call Becky with the good hair." While it's been proven (sort of) that Becky is neither Rachel Roy or Rita Ora — sorry! — the hunt for the good-haired homewrecker is still on while Jayoncé kicks back on the sandy beaches of Hawaii.

Anywho, for those of you who didn't catch Bey's opus, see what all the fuss was about when you peep "Sorry" below.