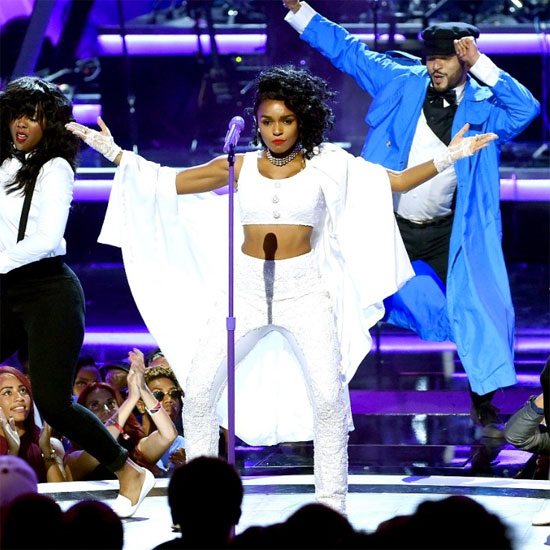 It may have been the last hour of the BET Awards 2016, but the Prince party was just getting started and about to get turned up. Leave it to Janelle Monáe to kick the energy of the night up several notches with her tribute. The Electric Lady paid homage to her mentor from head to toe, dressed in a white lace outfit with a fur stole, frilly blouse, fingerless gloves, buttons down her pant leg and high-heel shoe boots. She launched like a rocket into a feisty medley of tracks beginning with "Delirious."

The next Prince hit to get Janelled was "Kiss." She was joined by an agile female dancer to semi-recreate the music video, and they made quite a sexy pair. Janelle soon dropped to the floor, crawled around, then popped back up to get back on the good foot. She did some fancy footwork then turned her back to the audience to reveal that the backside of her pants was cut out in a cheeky nod to Prince's buttless costume from the 1991 MTV VMAs.

Janelle didn't stay ass out for too long, and put on a white trench coat to cover up as the music segued into "Pop Life." She was rejoined by her three dancers and two background singers to sing the Around the World in a Day cut.

If you were looking for the ubiquitous awards show gospel choir, they trotted out to join Janelle on "I Would Die 4 U." They held it down with the band in the back while Monáe and her crew brought the house down in the foreground with their non-stop energy and spot-on choreography. She even dipped down off the stage to interact with the audience, including Lifetime Achievement Award honoree Samuel L. Jackson who was all in. He wasn't the only one who was enthralled by this thrilling performance from beginning to end.