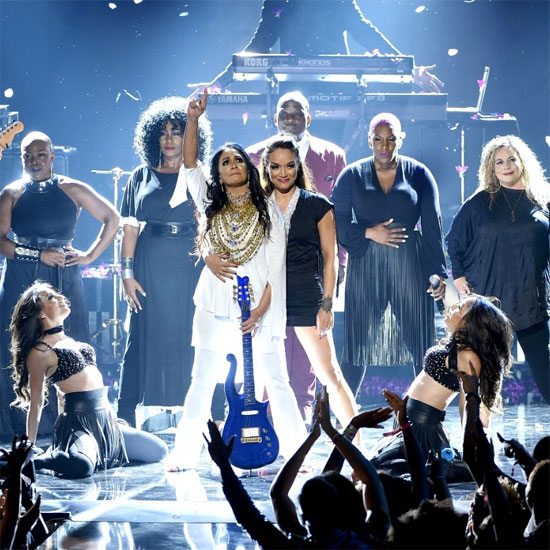 To say that the BET Awards 2016 saved the best for last when it came to the Prince tributes, would be the understatement of the century.

The final Prince tribute of the night was the one that everyone was waiting on and it came courtesy of Sheila E., who brought a few people along with her for the occasion. In an effort to include those who worked extensively with His Royal Badness during his career but have been shamefully excluded from other high-profile tributes, Sheila performed with singers Liv Warfield, Shelby J, Elisa Fiorillo and members of the NPG Hornz, among others.

Sheila wasted no time in funking things up by starting off with Sign O' the Times' "Housequake." Everyone was in step, in tune and in a serious groove while Sheila sang and played drums, much like she did on the Sign O' The Times Tour back in 1987. Almost 30 years later she was still killing it. Joining the onstage party was Prince's first wife Mayte Garcia and Australian dancers The Twinz who showed that they, too, still had it as they danced to the music.

A smooth segue into P's "America" came next as did a surprise appearance by Jerome Benton, formerly of The Time, who put an electric guitar on Sheila then joined in the onstage reverie. The funk party didn't miss a beat when the music switched to "Baby I'm A Star." Everyone onstage actually appeared to shift into high gear and didn't appear the least bit tired, least of all Sheila E. who danced, pranced and even slid into a pose. She and Jerome partied like it was 1986 and they were back on the Parade Tour.

This already epic Prince tribute ended with Sheila E. and Mayte hoisting one of Prince's signature purple guitars high into the air as everyone surrounding them pointed to heaven and purple feathers rained down onto the stage.

Quite honestly, the only thing missing from this fete was Prince himself, but he was truly there in spirit and we felt his throughout this utterly perfect performance.