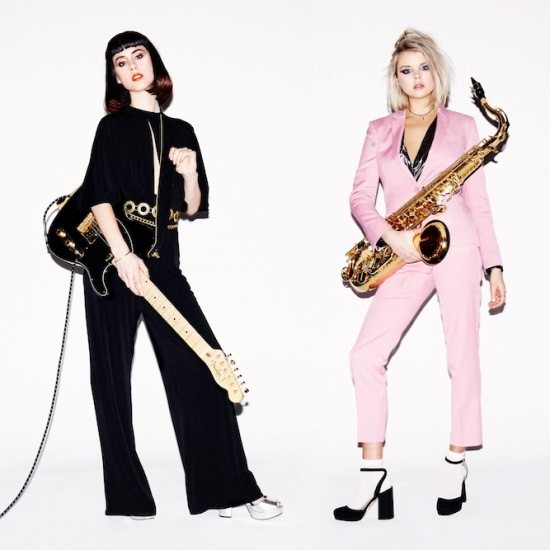 The Bounce-Worthy Londoners known as EKKAH cashed in on the favorable buzz surrounding their 2014 Last Chance to Dance EP by signing with Sony/RCA. After kicking off the new year with the shimmery Tourist-produced single "Small Talk" (and its accompanying neon-lit video), BFF's Rebecca Wilson and Rebekah Pennington headed stateside to spend some time in sunny California. Lest you think they spent the entire time relaxing on the beach (not that there's anything wrong with that), they also logged in some serious studio time as proven with their latest release "Space Between Us/What's Up."

The double A-side single was entirely produced by funk maestro DâM-FunK, fresh off his "Special Friends" release, and the influence is clearly felt throughout each song. Laid-back funk pulsates through layers of throwback R&B and disco-pop to create two distinct but equally satisfying dance tracks. While both songs deal with navigating the uncertain course of a relationship, you won't find any teary-eyed pleas here. Rather, the ladies are candid and forthright with their expectations with lyrics like "I never really wanted space between us / I wish you would come back to Earth instead of living in a different universe." and "No, I do not need your love / But I still need to know what's up." As with their previous efforts, we're loving their delicate vocals and warm vibes, but Ms. Pennington gave us a pleasant surprise with her saxophone skills. It seems the "Bex" still have a few tricks up their sleeves after all.

EKKAH is slated to drop their full-length debut early next year, but in the meantime, shimmy into the weekend with the groovy twofer below (also available for download via iTunes). In addition to a handful of tour dates this summer, the twosome is heading to the Glastonbury Festival in late June to join a ridiculously stacked line-up of artists (including Adele, Disclosure, Laura Mvula, Gregory Porter, Kamasi Washington, Kwabs, Santigold, Jess Glynne, Earth, Wind & Fire, James Blake, Gary Clark Jr. and Michael Kiwanuka). Keep up with EKKAH on Twitter and Instagram for concert and album updates. And for more funky good vibes, be sure to check out DâM-FunK's debut contribution to !K7 Records' DJ-Kicks mix series.