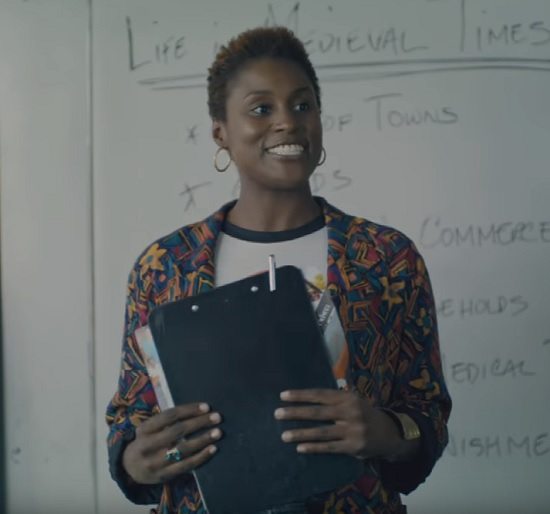 We don't know about y'all, but we've been really missing the regular dose of awkward and extremely funny that we got from watching Issa Rae's groundbreaking web series The Misadventures of Awkward Black Girl. Of course we understood that Issa was off doing big things and making power moves — like becoming a best selling author, rubbing elbows with Shonda Rhimes and signing deals with HBO — but we selfishly wanted her to check back in with J and her office mates and on-again, off-again romances. However, while ABG doesn't seem to be coming back anytime soon, it looks like we'll soon be getting our regular dose of Issa as her HBO venture, Insecure, will be arriving on the cable channel this fall. Not only that, but we also have a teaser trailer for the series, and it looks friggin' hilarious.

Issa plays a woman (who also happens to be named Issa) who leads an after-school mentoring program. As Missy Elliott's "WTF (Where They From)" provides the soundtrack, we see bits and pieces of her awkward life unfold. The kids in her class roast everything about her, from her clothes to the way she talks. The white staffers at her job thinks she's the go-to dictionary for black slang. She has an on-again, off-again relationship with her current beau (played by The Game's Jay Ellis). And last, but not least, she has a strong bond with her friend Molly (Yvonne Orji) who helps keep her balanced through all the BS. Basically, this looks like Awkward Black Girl 2.0, and we are allllllll the way here for it.

Check out the trailer for Insecure right here and look for it on HBO and HBO Now in the fall.


TAGS:  Issa Rae, Jay Ellis, missy elliott, Shonda Rhimes, Yvonne Orji
Previous: Morning Soul: He’s Like Everything I Dreamed Of But Better Than The Preview Next: Miguel Wants You To ‘Come Through And Chill’