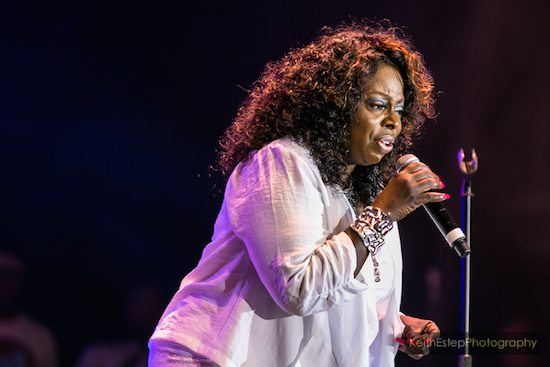 The sun may have set by the time Angie Stone took to the stage on day two of the 2nd Annual ATL Soul Life Music Festival on Sunday, May 29th, but she made sure to kept temperatures and spirits up with a performance that chronicled her 40-year career and featured one hit song after another and even some surprises.

Angie set the tone with her catchy song "Pissed Off." She switched things up with her next song, a cover of Beyoncé's "Me, Myself and I," which sounded super soulful in Angie's hands. She dipped back into her arsenal of hits with "I Wanna Thank Ya." The uptempo groove got the audience at Wolf Creek Amphitheater on their feet to two-step. They stayed on their feet for the next surprise: a Sequence reunion! Stone brought out original group members Cheryl "The Pearl" Cook and Gwendolyn "Blondy" Chisolm to join her for a performance of "Funk You Up" and the crowd went absolutely wild. The sight of the first ladies of hip-hop back on stage together for the first time in over 30 years and rocking the mic was nothing short of amazing.

And the party was just getting started. After the mini-Sequence performance, Angie kept the momentum going. She performed "Everyday" with a pinch of D'Angelo's "Brown Sugar" mixed in to sweeten it and a cover of the dearly departed Natalie Cole's "Inseparable." Angie was in a zone when it came to singing her big hits "Brother," "No More Rain" and "I Wish I Didn't Miss You." She was having such a good time, that her set ran a little long and she was forced to cut her last song "2 Bad Habits" short. However, the rushed ending to her set didn't take away from the excellent show that this hip-hop soul legend clocked in.