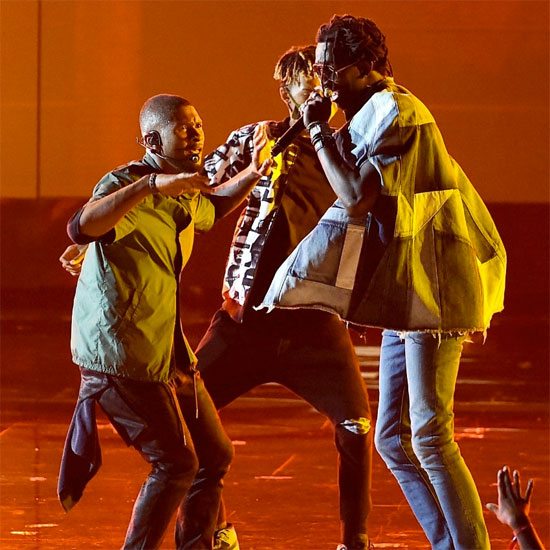 Perhaps one of the more politically-charged awards ceremonies we've seen in a while, the BET Awards 2016 delivered more than music. After a stunning opening act by Beyoncé and Kendrick Lamar and one of the most poignant and beautifully-worded call-to-actions by Jesse Williams, the baton was passed to Usher. Mr. Raymond sauntered into the 2016 BET Awards with his gold grill and his squad, ready to deliver an electric performance of his latest single "No Limit." Although the song itself is about Usher likening his relationship to the No Limit Records crew, the singer donned a green jacket with "Don't Trump America" in big white letters on the back. We heard his silent protest loud and clear as we saw the message throughout his energetic performance.

The crooner brought new energy to the stage in the form of his talented dancers and delivered one of the smoothest performances of the night. Usher danced and sang live without missing a beat as his crew maintained their energy in the background. At one point, Usher dueled with the youngest dancer, as he effortlessly mirrored his every move before Young Thug joined them on stage. Wearing a denim poncho of sorts, the rapper entertained with his rhythmic bars and delivery.

Urging his clique to turn up at the end of the performance we didn't want to end, Usher proved he could keep up with the young dancers with sweat beads on his forehead. Once the music went off, Usher et al. also went off by continuing to dance and keep the stage turnt with their unwavering energy until they stepped off the stage. Watch Usher and Young Thug's performance of "No Limit" at the BET Awards 2016 right here, and see if you can keep up with the crooner and his dancers.