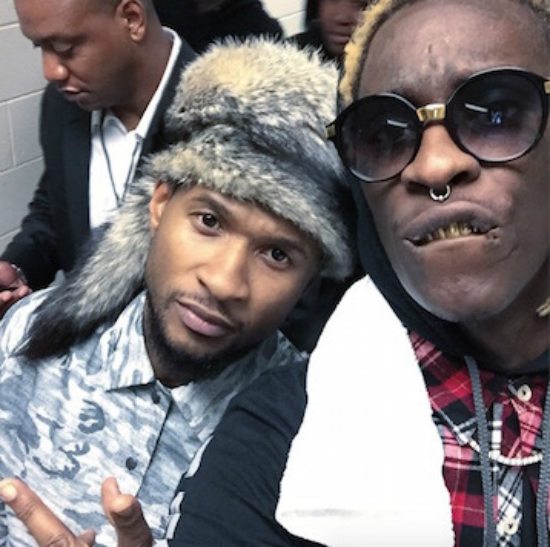 Usher just dropped his own version of trap soul and rapper Young Thug joins him on his new single "No Limit." A nod to Master P and the No Limit Soldiers, the single features Usher seductively saying "ugh" and using "no limit" as a double entendre. The singer warms the track with his timeless, silky vocals while Young Thug keeps the hip hop element alive. "Make you say ugh, no limit / Got that Master P, no limit baby / Give you that black card, no limit / Just know when you roll with a n***a like me," Usher sings.

If you do decide to roll with Usher, he also offers to give you that "ghetto D," you know, if you're into that sort of thing. Young Thug plays assist with his signature bars, wrapping up the single to create a radio-ready play just in time for the summer turn up. Produced by Brandon "B.A.M." Hodge and Christopher Perry, "No Limit" follows Usher's socially conscious track "Chains" with Nas and Bibi Bourelly released back in 2015. He also recently collaborated with songstress Yuna for her single "Crush," which was a sign Usher was working his way back to our hearts.

Mr. Raymond's last album, Looking 4 Myself, was released back in 2012, so we're still sitting here waiting for his delayed full-length album entitled Flawed due later this year. Usher recently headlined The Roots Picnic, performing a robust two-hour set backed by The Roots, performing all of his hits since 1994. One of many upcoming releases this year, you can preview Usher and Young Thug talk that talk in "No Limit" below. You can also listen to the track in its entirety if you're one of the folks who actually has a TIDAL subscription.