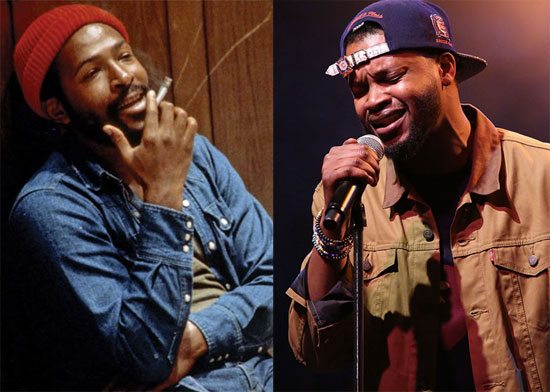 With his soul-drenched tenor and a mellifluous falsetto that can leave you feeling some kinda way, BJ the Chicago Kid has done the Motown imprint proud, hearkening back to its golden era. Many have compared him to label legend Marvin Gaye, so when news broke that he'd been chosen to record a posthumous duet with the icon to celebrate the 45th anniversary of "What's Going On," we couldn't wait to hear the end result. And though the rework officially dropped at the end of June, the tragic events of this week have reminded us that the lyrics are still all-too-relevant these many years later.

The duet appears on What's Going On, a 10-inch EP which also contains the original single along with its B-side "God Is Love," and a "Coffeehouse Mix" of the title track. Mixed by John Morales, the re-creation stays true to Marvin's vision, using all of the original instrumental parts. BJ's vocals blend so seamlessly that it almost feels like he was right there in the studio with Marvin back in 1971. In a statement to Pitchfork (where the track premiered), BJ admitted that "Singing alongside Marvin Gaye is truly a dream come true for me....Marvin Gaye wasn't only the standard for R&B, he also made a huge impact on pop music & pop culture. Long live R&B..." Check out the poignant rework, grab a copy of the four-track EP via Respect The Classics and let's pray that we aren't re-living these lyrical truths in another 45 years.

BJ also recently stopped by the famed Capitol Records Tower to record a session of their 1 Mic 1 Take studio series. Scroll down for video of "Turnin' Me Up," "Woman's World," and "Jeremiah/World Needs More Love" or head over to iTunes to add this acoustic jam session to your permanent playlist. The soul crooner resumes his In My Mind World Tour next week, so be sure to follow him on Twitter and Instagram for updates.