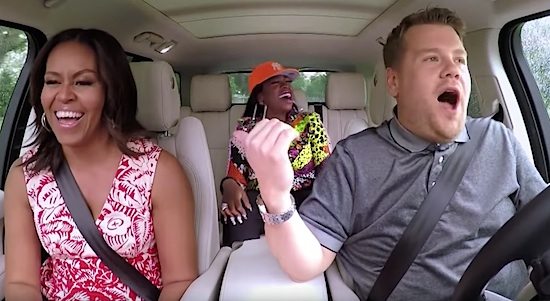 Though his show is on air in the wee hours of the morning, it's clear to say that host James Corden has been waking up the late night format during his stint as host of CBS' The Late Late Show. What's been especially fun is his viral segment "Carpool Karaoke," which has featured many notables, including Jennifer Lopez, Mariah Carey, Adele and even Stevie Wonder, sitting in the passenger seat of James' ride. While the celebs have indeed brought the star power, James outdoes himself with his latest passenger, First Lady Michelle Obama.

James pulled up to the White House gates for a short tour and was surprised when FLOTUS hopped in as his official tour guide. From there, hilarity ensued as the two discussed everything from the Obama's Secret Service code names to what she thinks life after the presidency will look like. And, of course, they get down to some tunes in the process. After a soulful throwback with Stevie's "Signed, Sealed, Delivered" kicked things off, they got down to a little bit of Beyoncé's "Single Ladies," complete with seated choreography. Then talk turned to Michelle's Let Girls Learn initiative and James decided to put on the initiative's charity single "This Is For My Girls." And that's when things got freaky, as Missy Elliott popped up in the backseat out of nowhere to rap her verse and then lead off a rap-a-long to her 2001 hit "Get Ur Freak On" (that "Copywritten, so don't copy me" line is even more salient after this week, huh?).

Will we ever have another First Family as cool as this? We highly doubt it. Cherish the last few moments we have with Chelly O as first lady when you watch her "Carpool Karaoke" segment below.