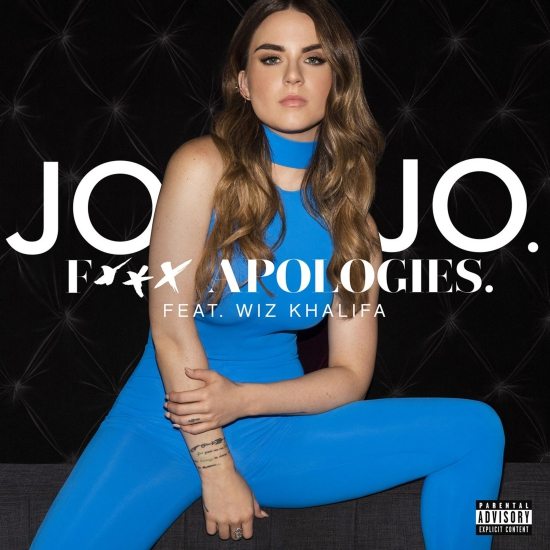 It's been nearly a year since JoJo made her return to music official with the release of her "tringle," which consisted of singles "Say Love," "When Love Hurts" and "Save My Soul." But while those were all fine and good, outside of releasing videos, she kind of left us hanging. Well, we have to hang no more, as JoJo is back, this time with a single, solitary new track she's calling "F*** Apologies," which features Wiz Khalifa and signifies a bolder, brasher side of JoJo.

On the track, Ms. Levesque's failing relationship has her feeling a bit unapologetic. Though her mate wants her to apologize for what's gone down, she wants him to miss her with the BS and get firmly to the left. "What you want from me / I would say I'm sorry if I really meant it," she sings on the chorus as she throws up the finger. And just in case he didn't get the point, she taps Wiz to make it crystal clear as he delivers a quick, charged-up verse. Though the combination of the two artists (and, for the matter, the song's title) are unexpected, they make it work over bumping production that's kissed with just a bit of West Coast flavor.

You can give a listen to "F*** Apologies" right here via Spotify. Be on the lookout for JoJo's third album (and first album in a decade) Mad Love, which is set to arrive in stores on October 14th.


TAGS:  audio, jojo, wiz khalifa
Previous: Morning Soul: Get Ready, Cause We Are On The Move Next: Nas & Erykah Badu Collaborate On Gripping ‘This Bitter Land’