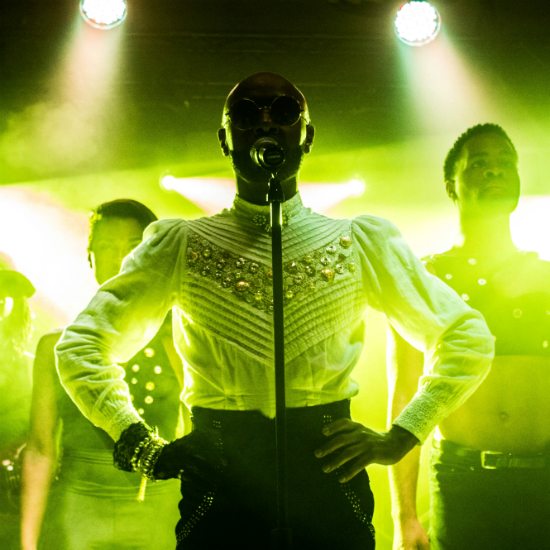 According to Rahbi, "All Rockstars Go To Heaven." Or at least that was the theme of his Strange Fruit VII event. On Sunday, July 24th at Aisle 5, a venue in Atlanta's Little 5 Points area, the Goldenchild paid homage to musical superstars of bygone eras, with the sounds ranging from disco funk to grungy rock.

The show opened with a who’s who of Atlanta’s up-and-coming underground musicians paying their respects to their own musical inspirations. This included Joy Conaway who covered Aaliyah’s “Rock the Boat;” Atlanta’s favorite backup band, Band of Brothers, covering The Beatles’ “Yesterday;” J.K. Howells who took on The Rolling Stones “Come Together” and Hero the Band providing their take on Nirvana’s “In Bloom.”

Next, the mistress of ceremonies Madam CJ warmed up the stage with amazing performances of Vanity 6’s “Nasty Girl” and Sylvester’s “Mighty Real,” leading into Rahbi’s own performance. Flanked by dancers, musicians and background singers on a crowded stage, Rahbi performed with manic energy and charisma that dared you not to pay attention, performing dance steps, high kicks, splits and other acrobatics that would have made Prince proud during his cover of “Let’s Go Crazy.” From there, the ATL son moved the crowd with a funky rendition of Earth Wind & Fire’s “Serpentine Fire,” Donna Summer’s 1975 hit “Love to Love You Baby” and then funked back up with Rick James’ “Give it to Me Baby.”

Not one to hog the spotlight, Rahbi invited a few other performers to take a trip down memory lane with blue-eyed soul special guest Katie Burgess giving an incredible take on Teena Marie’s “Square Biz,” along with his background singers covering Whitney Houston’s “I Wanna Dance With Somebody” and Minnie Riperton’s “Loving You.” Rabhi then returned to the stage to close the night with a cover of Donny Hathaway’s version of Gladys Knight & The Pip's “Giving Up,” a song that has been covered, remixed and refixed numerous times since it was released in 1964, serving as a perfect closer to a musical trip down memory lane.