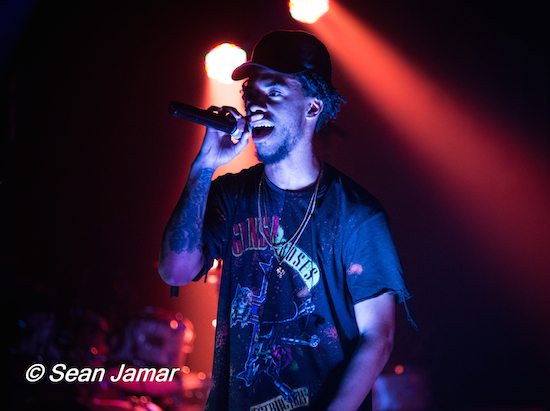 The past few years have seen a new crop of artists who were raised on the R&B sounds of the '90s take their own place behind the mic and on our playlists. Artists like Bryson Tiller and Gallant have made waves with a sound that throws back to that era while progressively moving forward in sound. One such artist is Atlantic Records signee ELHAE, who set the crowd on fire when he, along with singer Tish Hyman, opened up for BJ the Chicago Kid during his In My Mind Tour stop at New York City's Highline Ballroom.

The upstart, whose name stands for Every Life Has An Ending,  put on a high-energy set during his act, hopping around the stage so much that he lost his cap several times. He never lost his momentum, though, performing more than a few tracks from his recent album All Have Fallen, including "Comfortable," "Needs" and "Love A N***a." But he also took some time to give the audience a few of his previous gems, including the crowd favorite "Halfway Love." Though it was just him and his DJ, ELHAE made it feel like the entire stage was full. If there is one drawback to his performance though, it's that his bass-heavy songs often drowned out his voice, making it seem as though we were listening to a track rather than watching a live performance. But hopefully that's something that the fledgling artist will improve upon as he progresses in his career.


TAGS:  bj the chicago kid, Bryson Tiller, elhae, Gallant, highline ballroom, Sean J. Rhinehart, Tish Hyman
Previous: Get Crowned By KING On Their U.S. Tour This Fall Next: Morning Soul: Give Me Five On The Black Hand Side