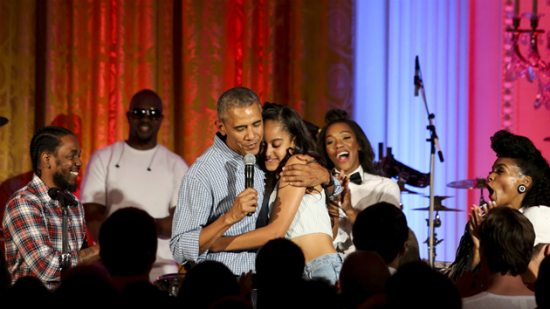 While you were celebrating America's birthday, Malia Obama was having the best weekend ever. President Barack Obama and the first lady hosted an annual July 4th celebration for military veterans and their families, this year they enlisting the help of Kendrick Lamar and Janelle Monáe to entertain the crowd. While the festivities were moved inside due to the weather, all parties involved looked like nothing could rain on their parade. The Obamas' first born also celebrated her birthday on Monday, turning the ripe old age of 18. What better way to celebrate a birthday than in the White House with Kendrick and Janelle. What made it more epic? They all joined together to sing "Happy Birthday" to her because that's what happens when you're the first daughter of the United States.

Both K. Dot and Janelle made it back in time from ESSENCE Festival to perform during the Independence Day celebration. And since you know we've got you covered, performances from the White House event will be available soon. Until then, you can watch Barack Obama's super cute rendition of "Happy Birthday" right hereand his remarks about the importance of achieving independence below. Be sure to wish Malia Obama a happy birthday and soak up these beautiful musical memories the Obamas continue to supply us with before they leave the White House.


TAGS:  janelle monae, kendrick lamar, Malia Obama, president barack obama
Previous: Maxwell Brings His ‘Lake By The Ocean’ To ‘Jimmy Kimmel Live!’ Next: Nicholas Ryan Gant Has A Powerful ‘Question’ For Us All