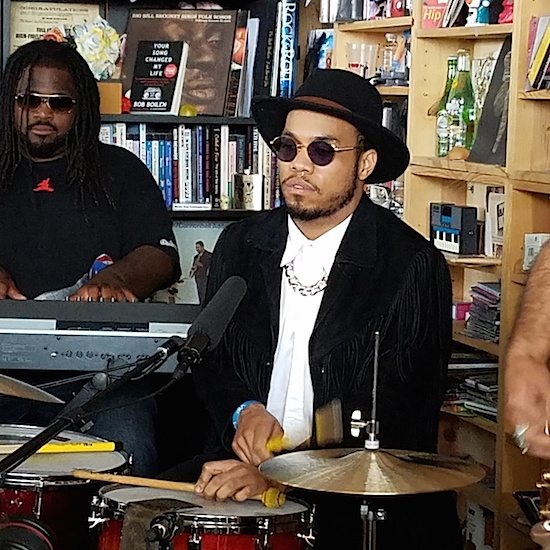 During his Washington, D.C. tour stop in June, Anderson .Paak decided to drop in on NPR Music's Tiny Desk Concert to play a few ditties for staffers and guests. Along with his band The Free Nationals, who Anderson calls his only friends, the crew squeezed into the iconic office space to perform a few cuts from Malibu and the NxWorries EP Link Up & Suede. The SoulBounce crew was front row and center to witness the live performance, which Anderson skillfully deconstructed and stripped down to be able to fit in the room. Like Anderson says in the video, we can attest to the fact that the office was indeed hot, yet like a true style-conscious performer, Mr. Paak kept his suede jacket and hat on the entire performance.

Because of the cozy quarters and sauna-like room temperature, it only made sense for Anderson to start his performance with "Come Down," screaming "Y'all n****s got me hot!" The Free Nationals followed Anderson's lead, filling the office with a palpable energy despite the musicians being contained to a few square feet. Using comedy as his segues, Anderson kept the audience tickled, as he constantly picked on his band, especially producer/guitarist Jose Rios. The eclectic crew then performed "Heart Don't Stand A Chance," which had the crowd excited from the minute they played the first few chords. The Free Nationals played double duty as background singers and turned NPR into a funky party equipped with a vocoder. Anderson then moved on to "Put Me Thru," supposedly about Jose's ex-bae. At this point the NPR office temperature was turned up even hotter, but Anderson still had everyone hypnotized with his enthusiasm and effortless vocals.

The highlight of the performance was when Anderson decided to take requests, which is rare for a Tiny Desk Concert. Not even a few seconds later, a long-time fan screamed "Suede" from the back of the room, which caught the entire band off guard. The single from his collaborative project with Knxwledge is riddled with the word "b***h," which you likely don't hear at the NPR office often. It was the opportune time, however, for Anderson to introduce older material to new fans and also showcase his ability to adjust his music to any climate.

Watch Anderson .Paak and The Free Nationals heat up and get down on NPR right here. If you don't own Malibu yet, then make the investment right now on Amazon or iTunes, and peep his upcoming world tour dates on his website.