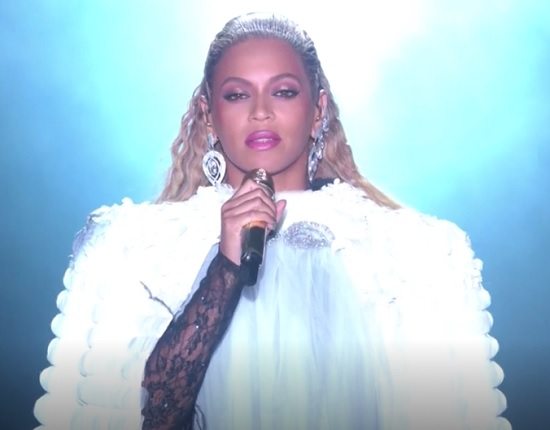 It was supposed to be Rihanna's big night. It was supposed to be Britney Spears' welcome back party. But, in the end, last night's MTV Video Music Awards was really all about Beyoncé. Seven days before the reigning queen of music's 35th birthday, MTV gave the Lemonade singer center stage at this years VMAs and basically let her take over with a 16-minute medley of hits from her current visual album. And like the music royalty she is, Bey took advantage of every second.

Draped in a heavenly feathered cape and wide-brimmed hat, she started with one of the spoken word sections from the Lemonade visual before doing a full performance of album opener "Pray You Catch Me" while flocked by angelic dancers bathed in white light. As the song continued, each dancer fell in a circle of read light before Bey herself fell and was caught by a hooded black man (her longtime dancer Anthony Burrell) and eventually stood again. Soon, she segued into another spoken interlude while she pulled off the quickest costume change ever and then shook it up to the tune of "Hold Up." While giving the audience a tutorial on how to wine it like a boss (complete with a brief breakdown), she eventually pulled "Hot Sauce" out of her bag and broke a camera before moving on to the next spoken word number and to the middle finger anthem "Sorry" before donning a spotted fur (clearly from the 101 Dalmations Collection) for the fiery "Don't Hurt Yourself," during which she set fire to the stage...literally. She then finished everything off with a performance of "Formation," adding in another political statement  when her dancers eventually moved into formation of the "Venus" symbol, once again showing out for women — especially black women — everywhere. Every moment of her performance was a spectacle, proving why she was more than deserving of her 11 nominations and the coveted Video of the Year award win.

At the end of the night, Bey left us stunned and wanting more, making every act that came after pale in comparison (and MTV is wrong as hell for having Britney's "comeback" performance placed directly after Bey's mini concert — they so shady). She left the ceremony as the most awarded artist in the history of the VMAs. Say what you will, but Queen Bey came to slay last night and she damn sure did.