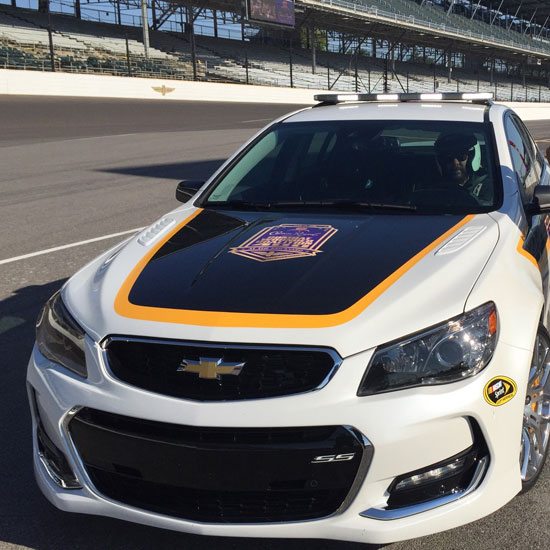 SoulBounce joined Chevrolet and NASCAR Diversity in Indianapolis last weekend to check out the Crown Royal Brickyard 400. We were excited to participate in this weekend of racing and to be on hand for the official press conference announcing the NASCAR Chevrolet Diversity Scholarship Contest geared toward driving diversity in science, technology, engineering and mathematics (STEM) education and stock car racing. The only thing left to do after packing our bags, was to figure out how to infuse some much needed soul into NASCAR's whole lot of country and little bit of rock and roll. After all, Chevy and soul music go together like Prince and little red Corvettes.

Early Saturday morning, we headed to the Indianapolis Motor Speedway to pick up our media credentials and were literally off to the races. First stop, a ride in an official pace car, the Chevy SS, the same model Team Chevy races at speeds in excess of 200 miles per hour. Our top speed around the two mile track was 107 mph, thank goodness the driver knew what he was doing and didn’t let our roller coaster antics distract him around curves three and four. We covered two miles in a little over 90 seconds. Drivers competing later that day would cover the same ground in about 50.

Our next stop was Gasoline Alley for a tour of behind the scenes magic and chat with Chevy and NASCAR officials and pit crews before attending the drivers’s meeting to get the lowdown on race day logistics. Finally, we headed indoors to escape the sweltering 97+ degree heat and chowed down on burgers and dogs as we watched our first race of the weekend, the Xfinity Series Lilly Diabetes 250.

When we first got to the Chevy Suite, our mental soundtrack immediately switched to Ludacris’ “Move B***h” as the pace car pulled off the track to the deafening roar of 20 engines accelerating to speeds upwards of 170 mph. We swapped earplugs for headphones and listened as drivers Danny Suarez of Mexico and Darrell “Bubba” Wallace, Jr. of Alabama chatted with their crew chiefs about vehicle performance. We closed out the day with a group meal at Rock Bottom Brewery. Many of the minority journalists at the table were surprised at how much we enjoyed NASCAR and looked forward to cheering for Team Chevy the next day.

Sunday morning found us amped for breakfast at Café Patachou and the Sprint Cup Series Final. Our crash course in all things NASCAR had us following the race like long-time fans (and well, the excitement of it had us all in, don’t believe it, attend a race for yourself). We dug in the crates for our race day soundtrack and grabbed the album that signaled Jay Z’s triumphant return Kingdom Come. With Danica Patrick and Dale Earnhardt, Jr. repping Team Chevy, we couldn’t wait for them to hit the track while “Show Me What You Got” played in our heads. Their skill on the track had us reminiscing about their cameos in the song's music video racing around Monaco with Jigga. As we cheered for Danica while she ducked and dodged the boys to hold her own, we sang to ourselves: "Show me what you got, lil mama/ Show me what you got, pretty lady/ Show me what you got, shorty." Team Chevy didn’t win the race, but Chevy and NASCAR Diversity won big with us journalists and influencers.

Last but not least, can’t forget to shout out pit crews. After watching them in action, changing tires, pumping fuel and diagnosing and repairing vehicles after crashes (with tape, hello) in about 12 seconds, there was no doubt in our minds that NASCAR is indeed a sport. We applaud NASCAR Diversity for its new initiative to recruit diverse former athletes to staff this critical area of stock car racing where money and bragging rights are won or lost by just tenths of a second. It was cool to see brown and black brothers and a woman holding it down.

For all of the fast-paced excitement, the highlight of our trip was NASCAR and General Motors’ press conference announcing the NASCAR Chevrolet Diversity Scholarship Contest. As an African American, female-owned brand, SoulBounce has mad respect for corporate brands we roll with that roll with us as a people. We are proud to be GM Influencers and to partner with GM Diversity to rally college Bouncers (18-25 years of age) with STEM majors to go get that money. For more information about the NASCAR Chevrolet Diversity Scholarship Contest visit the official website.