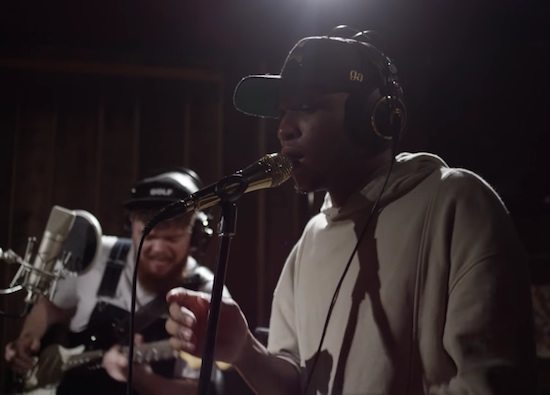 Even though he's currently in the midst of a nearly sold-out tour, R&B singer Gallant still managed a few studio pit stops along the way to record some hot collaborations. Earlier this summer, he teamed with SG Lewis for the sizzling dance groove "Holding Back." And now that he has resumed his In The Room series, his growing fanbase is being treated to both the audio and visual fruits of his latest partnership.

Like the previous installment, Episode 3 finds the DMV-bred singer teaming with an equally talented Brit -- this time, rising alt R&B/electro-pop artist Jack Garratt. But instead of reworking his own track, or taking something from his collaborator's repertoire (as he did in Episode 1), Gallant opts for a modern classic from none other than Janet Jackson. The duo boldly enter The Velvet Rope territory with their take on steamy hit "I Get Lonely," and it's pretty darn good.

The stripped-back interpretation retains the sultry heat of the original, while the singers' alternating vocals recall the chemistry of the Blackstreet-featured remix. But the interplay of Gallant's soul-shattering falsetto and Garratt's bluesy grit (both in voice and with his guitar) left us fanning ourselves and saying "Dammn Baby!" Not only is this acoustic slow-burner worthy of its own shine, we think Damita Jo herself would approve.

Watch these two fellas break it down below (be sure to watch 'til the very end for artist commentary), then visit the websites of both Gallant and Jack Garrett for ticket info on their current tours. Gallant's Ology and Garrett's Phase are both available for streaming via Spotify or download via iTunes. While we wait for a stork update from Ms. Jackson, revisit our Top 30 countdown and groove along with a playlist of our favorite Janet singles.