Mary J. Blige Has ‘Gone Crazy’ With The Ladies Of ‘The View’ 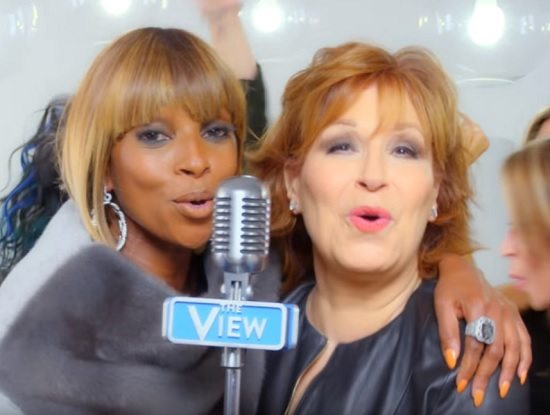 Can you believe that seminal daytime talker The View is about to enter its 20th season? Where did the time go? Such a milestone of course deserves something extra special, so the folks at the show decided to add a dash of royalty to the daily proceedings by having reigning Queen of Hip Hop Soul Mary J. Blige record a new, Diane Warren-penned theme song titled "World's Gone Crazy" for the new season. They also decided to do us one better and give us a full-out music video to mark the occasion.

As far as talk show themes go, "World's Gone Crazy" isn't necessarily breaking the mold, with its power pop sensibility and big, sing-along chorus. However, with Mary at the helm, the song gets an added dose of soul as the singer belts over the buzzing guitars and trap-light drums. The song's accompanying video (because why wouldn't this have a video), however, brings some much needed fun to proceedings. Set up under the premise that show leader Whoopi Goldberg is pitching a video treatment to MJB, it's really just an excuse to get all of the other co-hosts — Raven-Symoné, Sunny Hostin, Joy Behar, Jedediah Bila, Paula Faris, Sara Haines and Candace Cameron-Bure — to dance, lip synch, fling their hair and be wild and raucous while Mary sings and vamps in a grey fur top and knee-high grey boots. Alright then, Muva Blige!

Mary is set to appear on The View during its season-opening week to perform the song — and probably discuss her recent divorce — with the ladies. Until then, you can see the video for "World's Gone Crazy" below.