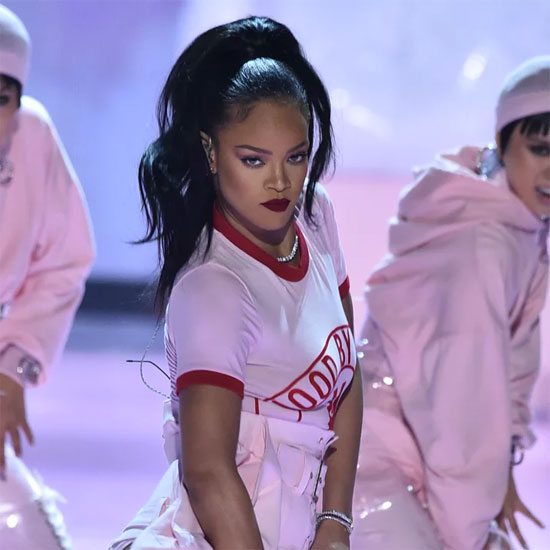 Last night we tuned into the 2016 MTV Video Music Awards fully expecting a night full of artists we could care less than zero about, which has been the case in recent years. Then in turned into Black Girls Rock! right before our eyes thanks in large part to the night's Video Vanguard Award recipient, Rihanna. Way before Beyoncé stole the show, Rihanna opened it to kick off the festivities with her first of four performances.

Dressed in a cotton candy pink Hood By Air situation (because how else do you describe a corset with sleeves attached at the waist?) and rocking a high ponytail, RiRi and her dancers launched into their routine to the tune of "Don't Stop the Music." She didn't stay for long on the song before smoothly segueing into "Only Girl (In the World)," which also got a quick run through. Rih spent more time on "We Found Love" before wrapping up her high energy dance song segment with "Where Have You Been." The show opener was mildly exciting, but it cast a bright spotlight on Rihanna's live singing and dancing abilities. Her mic was on but she was mostly lip-syncing to a track and more concentrated on hitting the choreo as best as she could.

For her next feat, Rihanna was joined onstage by what looked like hundreds of dancers (many of which were fans) for her island style dancehall segment. The stage looked like a packed, hot, sweaty nightclub with everyone wining and liming. Dancehall queen Rihanna reigned over her subjects with a medley of "Rude Boy," What's My Name" and "Work." This performance was more in the Bajan sensation's comfort zone and she was right at home, appearing more at ease and natural.

Sadly, Rihanna's next performance followed everyone getting drunk in love off of Bey's Lemonade, and the limitations of RiRi's voice were all too clear on her first song, "Needed Me." It didn't help that seemingly every other word was censored when she began singing, but then she tried to hit a series of high notes that sounded like a wounded cat. It was painful, but she took some of the sting away with the alcohol-infused "Pour It Up" prior to wrapping up with "B***h Better Have My Money." She may not have sounded like much for this particular medley, but Rihanna had swag for days rocking hip high boots and a purple mink stole perched on one shoulder.

Last but certainly not least, for her final performance of the night Rihanna switched it up yet again stylistically and vocally. Wearing an opulent khaki colored gown, she was joined by her band and a horn section instead of dancers. It was time for Rih to show the world that she could in fact blow, and she gave an A-for-effort rendition of "Stay." She followed with a segue into "Diamonds" and finalized her baker's dozen of songs with "Love On the Brain." It was an odd selection to end on when she didn't perform one of the biggest hits of her career, "Umbrella," but it must be her next ANTI single.

Rihanna's 2016 MTV Video Music Awards takeover was definitely for her fans as they overdosed on her "live" performances, which provided an entertaining experience second only to seeing her in concert. She may have given her detractors lots of ammo, but she also showed that she's here to stay whether you like it or not.