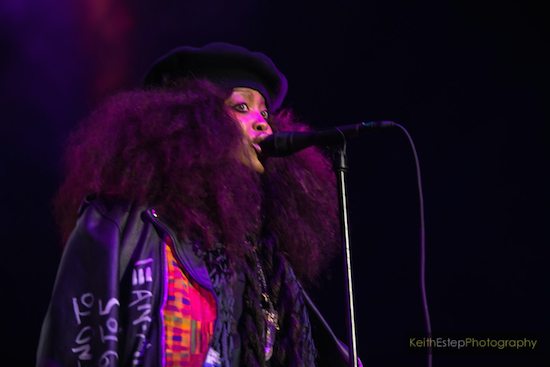 Day one of the 2016 Summer Spirit Festival came to a close with none other than Erykah Badu shutting it down as she usually does. The singer took her own sweet time in getting to the stage, which unfortunately cut into her performance time. However, once she finally made it to the stage almost all was forgiven when she started singing and took attendees on a soulful cosmic journey through her catalog.

Badu took us back to "On & On" and the beginning of her career when she rocked mile-high headwraps and ankh jewelry. Erkyah, who was dressed in multiple layers and a massive wig with two long braids hanging down, may have switched her personal style up, but her music is timeless. She continued to take fans back in time with "Love Of MyLife" and worked in a few hip hop classics such as Whodini's "Friends" and Slick Rick and Doug E. Fresh's "La Di Da Di" into the mix.

In addition to classic cuts, Badu had jokes galore. At one point she broke out into an impromptu song with the lyrics, "It's hot in this b****h," and throughout her set she would strike a pose and a video of cheering children would play on cue. Erykah was truly at home and at ease, even if she was taking a few too many pauses and breaks in the music given the lateness of the hour and the vastness of her catalog. She crisscrossed through her tracks, singing "Me," "Apple Tree," "Time's a Wastin'" and "Other Side of the Game." Sadly, by this time there were only two minutes left in her set, and she was forced to rush through songs that people wanted to hear -- "Tyrone," "Next Lifetime," "Bag Lady" (which Janelle Monáe came out to join her on).  She ended with a quick medley of "Didn't Cha Know?," "Honey" and "Window Seat" before taking a bow.

Hardcore Badu fans got their yearly dose of the singer at the 2016 Summer Spirit Festival, but anyone wanting a full show from her left disappointed yet hopeful that she redeems herself next year at the same time, same place.