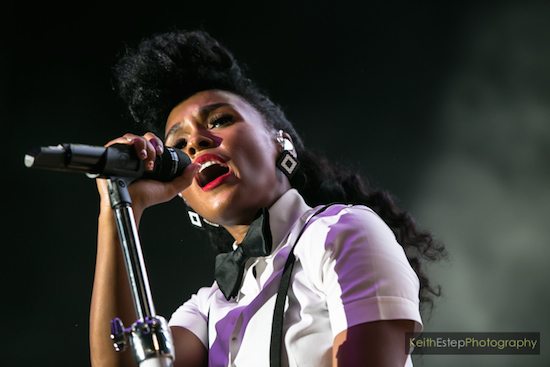 Returning for the third time to the Summer Spirit Festival was none other than Janelle Monáe whose show provided the highlight of day one of this year's event. Everyone's favorite black-and-white clad android came alive after a dramatic introduction and being wheeled out to center stage by George 2.0. Janelle began with a trio of songs found on The Electric Lady -- "Givin' Em What They Love," "Q.U.E.E.N" and the album's title track. She set it off early and kept building momentum throughout her set by channeling both James Brown on a cover of "I Feel Good" and Jackson 5 on "I Want You Back."

Janelle jumped back to her own material to treat fans to her soaring slow jam "PrimeTime" and the politically charged "Cold War," in which she referenced Dr. Martin Luther King, Jr. and encouraged the thousands under the sound of her voice to "Choose freedom over fear" and "Choose love over hate." After taking that time to pause for a cause, it was once again time to party hard, which she did on her next few tracks. She tipped on the "Tightrope," she did "Yoga" and she paid tribute to the one and only Prince on "Let's Go Crazy." She ended her energetic and eclectic performance with "Come Alive (The War of the Roses)" and transported everyone to the year 2719. Janelle Monáe is indeed the future.