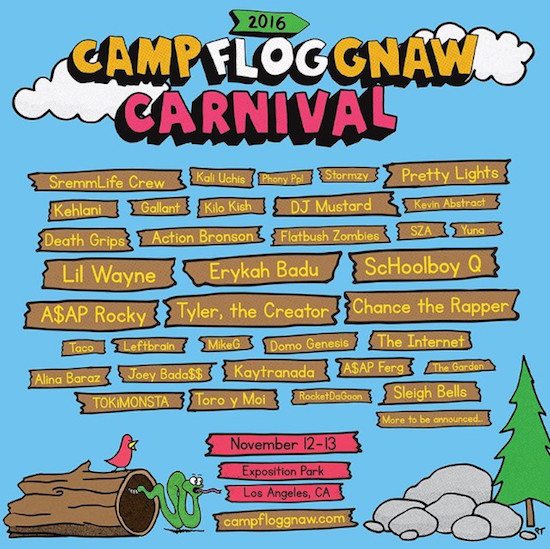 For the past four years, Tyler, the Creator has been bringing his brand of festival fun to Los Angeles via his Camp Flog Gnaw Carnival. For its fifth year, Tyler is taking on the mantra of bigger is better as he expands the festival to two days and calls on the big guns like Erykah Badu to help headline the weekend. The Carnival, which takes place November 12th and 13th at L.A.'s Exposition Park, will also feature performances by Chance the Rapper, The Internet, ScHoolboy Q, SZA, Yuna, Kaytranada, Kilo Kish, Kehlani and Phony Ppl are also on the extensive bill.

Rapper A$AP Rocky and his crew return for the second year in a row to the festival, which includes as the title suggests, a carnival atmosphere complete with games and prizes. While the website is framing the weekend as an all-ages, family-friendly event, something tells us that with acts like Lil Wayne and Joey Bada$$ on the bill, things won't stay kid-friendly or Rated G for long.

Tickets for the 5th Annual Camp Flog Gnaw Carnival are available on the website. You'd better act fast, though; single-day general admission tickets are already sold out despite just going up for sale this morning.