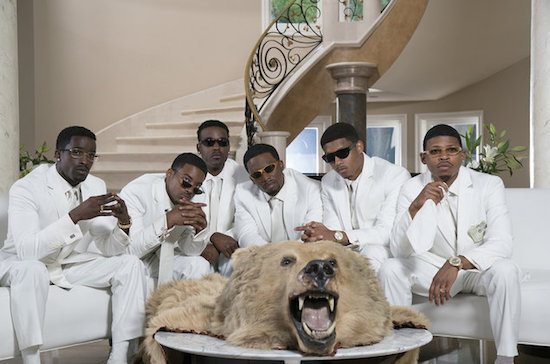 Ever since BET released the first trailer for The New Edition Story back in June, we've been anxiously waiting for another look at the three-night miniseries. While we'll still have to wait a bit longer to see the completed project when it airs in January, we can at least scratch that itch with a newly released extended trailer and clip from the film.

The trailer also gives us further look at the supporting cast, which includes Wood Harris, a wigged-out Tank, La-La Anthony, Faizon Love and Duane Martin. Michael Rapaport also makes an appearance as a bossy, loud-mouth music exec, which seems to be the perfect role for him considering how much he seems to enjoy overstepping his boundaries these days. Massive eye-roll to "Remy" aside, the rest of the cast looks like they put in some serious work.

In the additional clip from The New Edition Story that's surfaced, viewers are treated to a three-minute scene of McClain as Bobby Brown performing "My Prerogative" to a audience of screaming fans. Meanwhile, the members of Bell Biv DeVoe are waiting in the wings pissed off because he's gone over his set time. Powers as Ronnie DeVoe decides to take matters into his own hands and bum rushes the stage, interrupting and effectively ending Bobby's performance and ushering his BBD brothers on stage to perform "Poison." Bobby is pissed and although he leaves the stage he soon returns and a dramatic brawl between the former band members ensues.

Wow. This actually looks like quality -- from the acting to the singing to the dancing to the embodying of real-life individuals -- and we are here for it. The New Edition Story premieres on January 24, 2017 and runs nightly through January 26th. In the meantime, you may want to brush up on your dance steps because something tells us that it's gonna be a serious dance party going on in living rooms around the country when this airs.