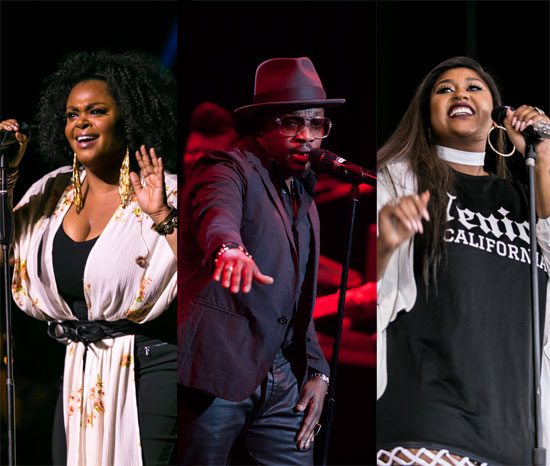 The time is nearing for the hippest trip in America to bring the hottest awards show back for another year of celebrating Black excellence in soul and R&B. BET's Soul Train Awards 2016 are scheduled to take place on Sunday, November 6th in Las Vegas, and Erykah Badu is back to host, write, produce and sprinkle her Black Girl Magic all over the awards like she did last year.

We're still awaiting word on the Soul Train Awards 2016 nominees, performers and presenters, but everyone should still make plans to get to Las Vegas this November for the Soul Train Weekend 2016. BET and Soul Train are presenting a four-day series of events surrounding the annual awards show that will feature performances and appearances by numerous SoulBounce faves.

The weekend fun kicks off at the luxurious Mandalay Bay Resort and Casino on Thursday, November 3rd with the Acoustically Speaking concert sponsored by Toyota featuring intimate performances by Monica, Jazmine Sullivan and Yuna. Things continue to jump off on Friday, November 4th with the Soul Train Music Festival with last year's inaugural Lady of Soul Award winner Jill Scott headlining a bill that includes Anthony Hamilton, Tyrese and Tish Hyman. A day full of activities are planned for Saturday, November 5th, including the Soul Train Day Party with Bell Biv DeVoe and Kid Capri setting things off that afternoon and The Comedy Get Down happening that night with featured comedians Cedric "The Entertainer", Eddie Griffin, D.L. Hughley, George Lopez and Charlie Murphy. Believe it or not, this is just the preliminary list of performers with more to be announced in the coming weeks.

In addition to all of the above and the Soul Train Awards 2016 that Sunday, there'll be after parties, VIP lounges and the Las Vegas strip where people can turn up and turn out. This sounds like our kind of vacation.

View the current schedule for Soul Train Weekend 2016 below and for more information on this year's festivities, visit the official website to get all the details and purchase tickets. VIP packages are on sale now and tickets for the general public go on sale on Friday, September 30th.