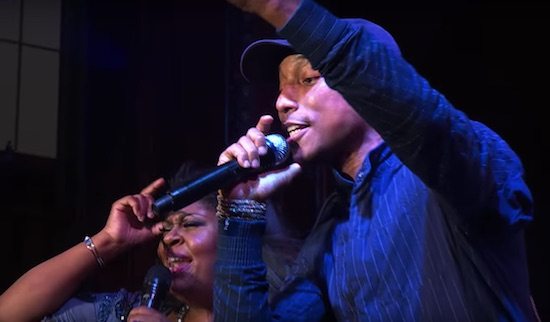 Over the weekend, the highly-anticipated movie Hidden Figures premiered amidst much fanfare at the Toronto International Film Festival. The flick, which features Taraji P. Henson, Octavia Spencer and music's own Janelle Monáe, tells the inspirational tale of three African-American women who played a major role in NASA's first successful space launch.

The film wasn't the only thing that made its debut last weekend, however. "I See a Victory," the first single from the Hidden Figures Original Soundtrack, also made its official bow with a soul-stirring live performance. Gospel powerhouse Kim Burrell and GRAMMY-winning producer Pharrell Williams treated the packed house to the first listen of this original song. Backed by Toronto-based gospel group Echoes of Praise, the rousing performance featured Burrell doing what she does best -- ministering the good word with her voice. While Pharrell seems to be playing the role of hypeman in this clip, he is one of the film's producers in addition to scoring the entire soundtrack alongside legendary composer Hans Zimmer.

Earlier this year, Pharrell told Variety why it was important for him to be a part of this project. "After my producing partner Mimi Valdés and I heard about this project, we basically begged the producers and studio to allow us to participate," he explained. "This is an extraordinary story about black women with genius mathematical minds who contributed to American history. It takes place in Virginia, my home state, and at NASA, a place I've been obsessed with since childhood."