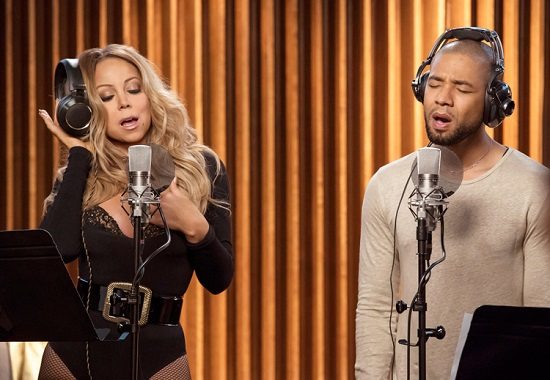 After an uneven second season, it seems that FOX's Empire might be finding its footing again in its third season. The show is also trying to correct course musically as well after Season 2's music didn't quite have the chart resonance that the first season's songs did. The show's first musical offering from this season, "Need Freedom," was fairly solid but not exactly an out-of-the-park smash, so perhaps the addition of industry legend and music star Mariah Carey can help.

Mariah joins the cast next week as megastar singer Kitty, who will play a role in helping a PTSD-suffering Jamal (Jussie Smollett) regain his confidence both in the studio and on stage. The two come together for steamy duet "Infamous," about a love that is dangerous but both parties can't seem to resist. The piano-led ballad is characteristically Mariah, with her stacked vocals and whistle register heavily featured throughout. However, it's Jussie that kicks things off with a subdued vocal before Mariah comes in and pretty much takes over the show. From there, the two trade verses and chorus as the sing of their "infamous" love (though, it's not really explained how exactly their love gained its infamy). Things get a little strange though when Jussie provides an unnecessarily Auto-Tuned bridge near the song's end that completely kills the song's intimate vibe.

To be quite honest, "Infamous" is closer to a Mariah filler track that would get lost among other hits on the record than it is to a groundbreaking single. In fact, it's safe to say that it's only being marketed to the public to capitalize off of Mariah's name. We were hoping that the addition of a vet like Carey would up the musical ante a bit, but we're more than a bit underwhelmed. Hopefully there'll be another Mariah collaboration coming down the pike that does her presence on the show more of a service.

Take a listen to "Infamous" below and let us know if you feel the same.


TAGS:  audio, Empire, Jussie Smollett, mariah carey
Previous: Morning Soul: Dipping In My Blue Impala Next: Derek Minor Goes Back To His Roots With BJ The Chicago Kid In ‘Until I’m Gone’