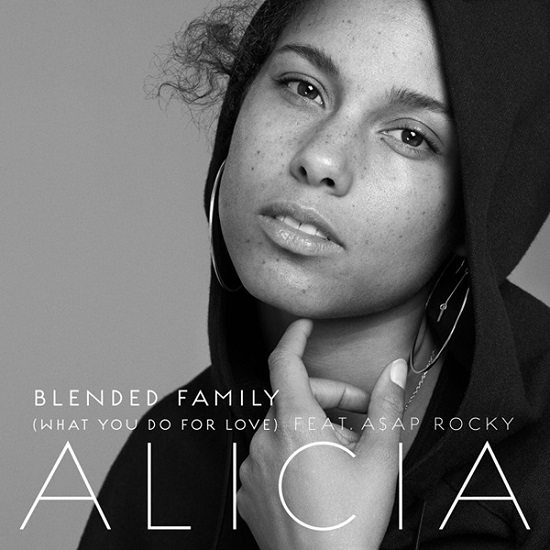 Alicia Keys has made some major strides this year, what with releasing her singles "In Common" and "Hallelujah" and landing a spot as a judge on this season of the hit reality competition The Voice — not to mention starting a conversation and recruiting a few notable names to her makeup-free campaign. But the singer/songwriter perhaps makes her biggest stride thus far with the release of her latest single, the A$AP Rocky-featuring "Blended Family (What You Do For Love)."

Crafted around an acoustic guitar loop and incorporating bass and hip-hop influenced drums, the song finds Alicia speaking to her experience as a stepmother after marrying hubby Swizz Beats, with the track addressing her stepchildren directly. "Hey I might not really be your mother / That don't mean that I don't really love ya," she sings. "And even though I married your father / That's not the only reason I'm here for ya."

That sentiment alone is touching, but what makes "Blended Family" so major isn't just the song's subject matter, but who she dedicates the song to: Mashonda, who happens to be Swizz's ex-wife. If you'll recall, when Alicia started dating Swizz, rumors buzzed that he wasn't quite divorced from Mashonda at the time (with Mashonda stoking those flames over the years). That all seems to be water under the bridge now, though, with AK even addressing it on the second verse: "I know it started with a little drama / I hate you had to read it in the paper / But everything's alright with me and ya mama / Baby everyone here you know adores ya." Bringing that theme of togetherness home is featured rapper Rocky, who contributes a quick sing-songy verse about having four stepmothers and weirdly shouts out "godsisters who eventually slept with us." Umm, OK.

Along with the release of "Blended Family," Alicia also finally announced the name and release date of her forthcoming album. HERE will arrive in stores on November 4th and you can pre-order the 16-track set on iTunes now and get "Blended Family" as an instant download. But first, stream the single via Spotify right here and check out its accompanying lyric video below.