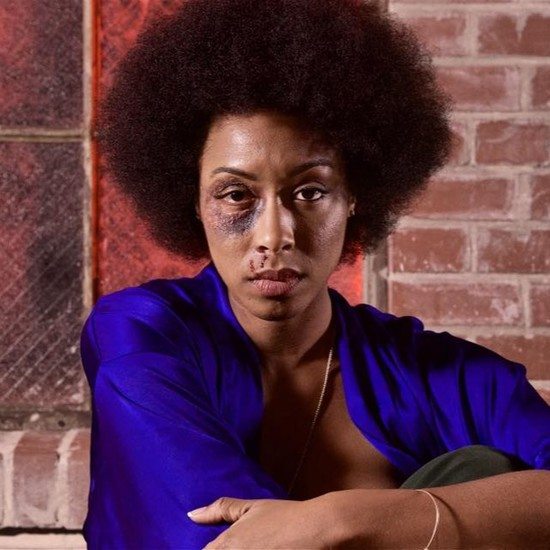 Domestic violence isn't a new phenomenon. But when a Presidential candidate has supporters around the country defending his boasts of sexual assault, or when numerous athletes' wives suffer at the hands of their husbands only to see the corporate powers-that-be sweep it under the rug, or even when popular shows mock men who have been abused by the women in their lives – it's not an exaggeration to say that these are scary times. That's why we appreciate the unapologetic defiance of Carolyn Malachi's new song "If You Ever Lay A Hand On Me," especially since October is National Domestic Violence Awareness Month.

Clocking in at under two minutes, Ms. Malachi minces no words and gets straight to the point. "I love you, but I'll kill you if you ever lay a hand on me," she warns. The singer imbues her honeyed vocals with steely resolve that is at times humorously specific ("Reach for me and you gon' draw back a nub."). Her words and tone recall a powerful (and funny) scene from The Color Purple where Sofia stands up for herself after Harpo "tried it."

Underscored by bluesy bass plucks and folksy guitar strums, the acoustic ballad is an effective statement further reinforced by the song's visuals. The uncomplicated clip features the classy singer, convincingly bruised and displaying a range of emotions. Was she all talk, or did she follow through? You'll have to see for yourself.

After hearing the song and watching the video, keep scrolling for a personal message from Carolyn Malachi revealing the inspiration behind the subject matter. "If You Ever Lay A Hand On Me" is currently available as a free download, but only for a limited time, so get your copy right now. The track, a follow-up to "Blowing Smoke" from her current EP, is from her upcoming album, Rise: Story 1, which is slated for release in December. Starting next month, Carolyn will tour the US and the Caribbean in support of the project. Visit her website for details, check out a special preview clip, and follow her social media pages for updates.

According to the National Coalition Against Domestic Violence, about 48 percent of women and 49 percent of men have experienced at least one “psychologically aggressive behavior” by an intimate partner, including humiliation, stalking and isolating a victim from his or her family and friends. If you or someone you know needs help, please call National Domestic Violence Hotline: 1-800-799-7233 | 1-800-787-3224 (TTY).


TAGS:  audio, carolyn malachi"
Previous: Teyana Taylor Wants To Take You From ‘Fade 2 Fit’ In New Workout Program Next: TLC Prepares Us For New Album With A ‘Joy Ride’ & A Message To The ‘Haters’