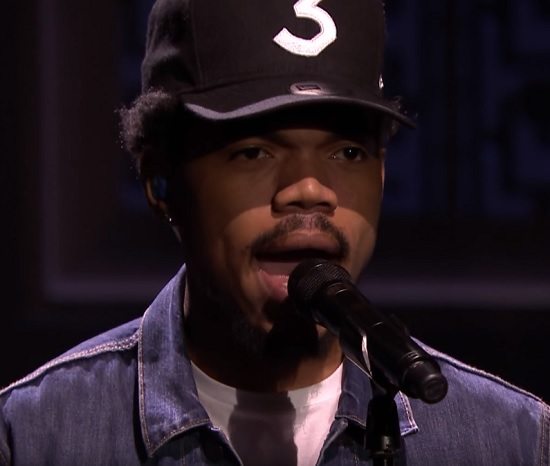 Chance the Rapper has been having the best career ever. Not only is he one of the hottest rappers out right now, but he's also been a catalyst in changing the way the entire music industry works with the release of his mixtape/album Coloring Book. Now, the Chi-Town representer is embarking on his massive Magnificent Coloring World Tour. Chance made sure to stop by The Tonight Show Starring Jimmy Fallon stage in the midst of all that, and he brought along his brothers in art Anthony Hamilton, Ty Dolla $ign, Raury and D.R.A.M. to help him deliver his  song "Blessings (Reprise)" to the audience.

The performance kicked off with the quintet on stage as Raury and Ty strummed their guitars. Then each male vocalist one by one sang the opening line "Are you ready?" before Chance began to spit his verse. Though the initial mood of the performance was somber at first, things quickly turned joyful as the song picked up and the song's chorus, a riff of Fred Hammond's "Let the Praise Begin," led into a full-on praise and worship service. White-robed choir members filled the aisles of the audience and the fellas headed to the front of the stage to round out the performance and harmonize. Though there were a few bum notes here and there (we won't point fingers as to who, but you know who you are, D.R.A.M.), overall it was an inspiring set that brought some positivity to late night.

Check out Chance and the crew's performance below. For tickets and info for Chance's mostly sold-out Magnificent Coloring World Tour, check his website.