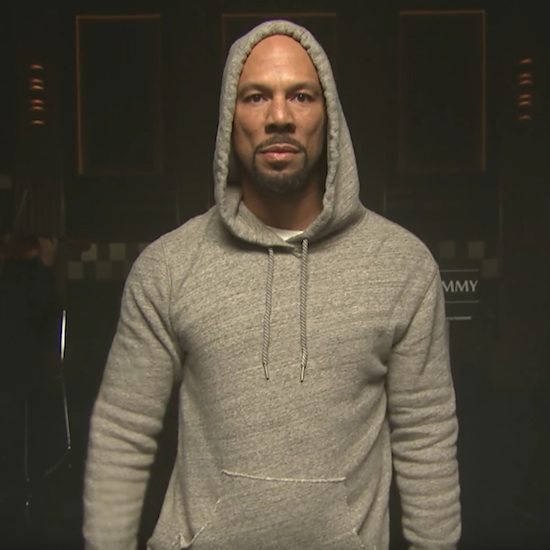 It can be difficult to do a great hip hop performance on TV. While there is a chance to add dancers, pyrotechnics and other stunts to bring a song to life, it’s rare that an MC is able command the stage and move the crowd without all that extra. Just look at half the performances at the BET Hip Hop Awards for an example. However, hip hop veteran Common, with an assist from BJ The Chicago Kid, did just that with his performance on The Tonight Show Starring Jimmy Fallon. The Chicago-Bred MC put his skills and stage presence to the test with an emotional performance of his single “Black America Again,” that touches you the way great art should.

The performance starts with Common, decked out in a heather gray hoodie, standing stiffly and defiantly, surrounded by The Roots and other musicians brought in for the set. Armed with just his mic and his wits, the MC moves around the circle of musicians, addressing the camera and the audience, the cadence of his stepsand his body language bringing his personal yet universal lyrics on the state of Black America to life. BJ, standing in for Stevie Wonder, was more than capable at handling the chorus and stepped into the spotlight when it was his turn to sing. The set ended just as solemnly as it started with Common standing in the middle, removing his hood and staring into the camera.

Of course, we shouldn't be surprised at how good Common's performance on The Tonight Show was. He also recently performed at NPR's Tiny Desk Conert series at South By South Lawn, making a living room-sized stage feel like a huge club. Check out last night's performance below, and be on the lookout for Common’s new album, Black America Again, dropping November 4th.