It’ll Be Hard To ‘Come Down’ After Anderson .Paak’s ‘Ellen’ Performance 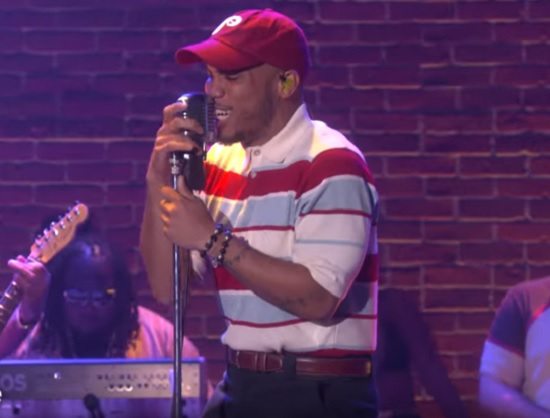 If you've been lucky enough to check out an Anderson .Paak and The Free Nationals show, then you already know that you are in for a dance party. Well, .Paak and his crew literally brought that party to The Ellen DeGeneres Show when they performed the infectious "Come Down" on Monday.

In a scene that looked like it was straight out of a juke joint, Paak and the band were joined onstage by a group of dancers that were having so much fun that it'll be hard to resist having your own dance party as you watch. Starting out on a circular platform, he eventually moved down to get down with the other dancers before hopping onto the drums and showcasing why he is one of the most electrifying and exciting live acts around. As the camera zoomed in and out, it literally felt like you were in the middle of one of the best nights of fun ever. Though the audience was never shown, it's hard to imagine that any of them were able to stay put in their seat, even if they were unfamiliar with Paak's music. Lucky for them, they each were sent home with their own copy of Malibu to get better acquainted with the man who has pretty much dominated 2016.

The super fun performance echoed Chance the Rapper's performance of "No Problems" on the same show last month when he turned the Ellen set into a rowdy event. At a time when daytime show performances can easily become one-dimensional showcases, Ellen allows artists to really bring their personalities and energy to the stage.

After a banner year in which he seemingly performed at every music festival around the globe, .Paak is showing no signs of letting up any time soon. His next project, Yes Lawd!, which will find him reteaming with hip-hop producer Knxlwedge as the duo NxWorries, drops October 21st.


TAGS:  Anderson Paak, Chance the Rapper, Knxlwedge, NxWorries, The Ellen DeGeneres Show, The Free Nationals
Previous: Teedra Moses Gets Us Deep Into The Groove In ‘Skin Diver’ Next: Robin Thicke & Nas Get ‘Deep’