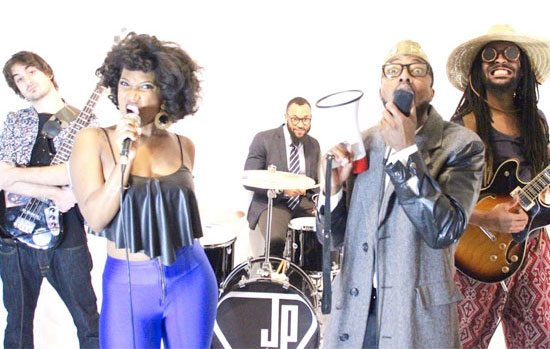 The latest song and video from the soul/funk/rock Philadelphia-based quintet Johnny Popcorn, “Coming Home” is a stripped-down earworm of a groove with an infectious video to match.

Incubated while founding members Tone Whitfield and Hezekiah were contributing their talents to Bilal's studio work, Johnny Popcorn was subsequently fleshed out into a full-fledged touring and recording act. With an aesthetic that borrows from the raucous guitar-driven approach of Cody ChesnuTT's best soul-rock work, the millennial strut of TV on the Radio and the left-of-center-yet-still-accessible approach of Gnarls Barkley, Johnny Popcorn sounds like rebellion, in the best sense of the word.

With "Coming Home," Hezekiah is undoubtedly the engine that drives the El Camino, with his energetic vocal approach and creative phrasing carrying the tune, swerving from lane to lane on the shocks of a tight rhythm section.

“Coming Home” pushes the speedometer into the red via the video. Taking the band-members-on-white approach shoved back into the mainstream more than a decade ago by Jet’s “Are You Gonna Be My Girl?,” the visuals for “Coming Home” confine the band -- indeed the whole video -- to a small white room. As a result, everything feels immediate and intimate, much like the sparse composition of the song itself. Hezekiah and company engage in the requisite mugging for the camera, as is required for most videos, but they do it with a wink and a smile. Because they're such good sports with it all, you have as much fun watching the video for “Coming Home” as the band no doubt had playing and filming it.

After it’s all said and done, not only does “Coming Home” stick with you, but so does the feeling that Johnny Popcorn would be an amazing act to experience live.