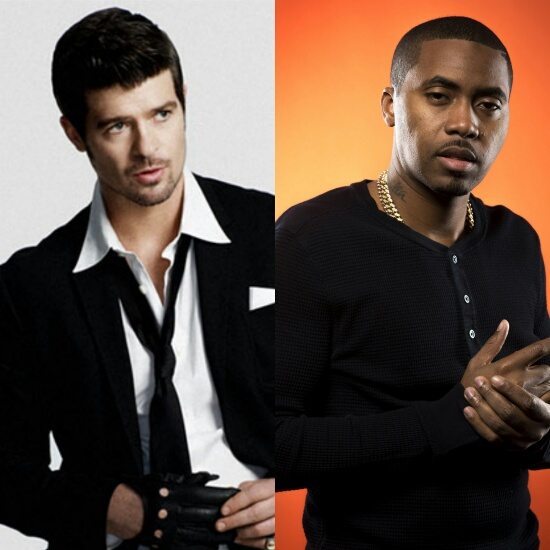 Robin Thicke has collaborated with quite a few hip-hop heavyweights in the past. Despite last year's mixed reception for his post-Paula single "Back Together" (featuring Nicki Minaj), his particular brand of R&B usually benefits from a well-placed hot 16. So for his latest comeback effort, he bypassed a slew of burgeoning emcees and went straight to the top, landing a guest feature from Nas for his new single "Deep."

The King of Queensbridge opens the track with an explosive freestyle, spitting a socially-conscious verse filled with bold statements like "Man, it hurts to see a 'Cop Killed A Black Man' alert," and “White man with a gun apprehended, he still alive / Black man with a gun, he has no chance to survive / They gon’ shoot him dead soon as they see the brown of his eyes." From there, Thicke's soulful croon glides through the sleek production as he sings about (surprise!) relationship issues. And while he sounds good, it's a bit of a let down after the passionate lead-in from Nas. Thankfully, the rapper reappears later in the track with another verse -- this time adhering to the song's relationship theme, though he manages a political jab at a certain "toupee-wearing liar".

Give "Deep" a listen and let us know what you think. Rumor has it that Robin Thicke is still working on a new album, so here's hoping that he'll get back to making music that we love. In the meantime, you can catch Robin on the small screen when he returns to Real Husbands of Hollywood for the Season 5 premiere, airing tonight on BET at 9 p.m. EST (peep the promo below). He's also a part of the stacked TIDAL X:1015 lineup along with Beyoncé, Alicia Keys, Common, Ms. Lauryn Hill, Emeli Sandé and more. Surprisingly, tickets are still available, so if you don't have plans for this weekend, secure your spot today.


TAGS:  audio, nas, Nicki Minaj, robin thicke
Previous: It’ll Be Hard To ‘Come Down’ After Anderson .Paak’s ‘Ellen’ Performance Next: The CrossRhodes Hope For A Coming Revolution With ‘Praying Prayers’