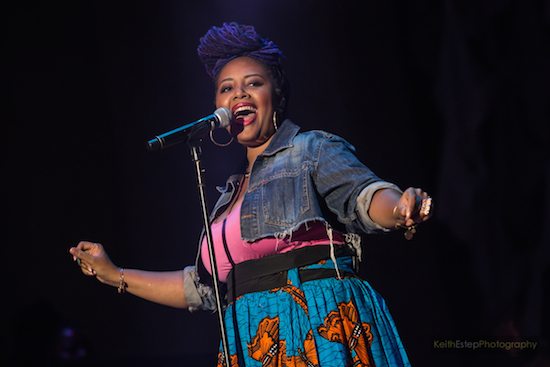 After Eric Benét's stellar opening set on the What I'm Feelin' Tour in Washington, D.C. on Saturday, October 8th, the next act to take the stage was soul music's favorite daughter, Lalah Hathaway. Her DJ, DJ Spark, prepped her grand entrance by spinning classic hip hop jams that had everyone in DAR Constitution Hall hyped up, singing along and clapping. The applause continued as Lalah strode to center stage to take her place at the mic and began singing "1 Mile." The song from her 2008 album Self Portrait started her set on a groovy note, and she kept the momentum going with her 1990 hit "Baby Don't Cry."

Hathaway kept things classic with her rendition of her father Donny Hathaway's song "Little Ghetto Boy." The updated version from her Lalah Hathaway Live album proved to be a crowd pleaser. She briefly spoke to the audience about the new album before singing her current single "Mirror," which had many in attendance in their feelings with the lyrics hitting home.

Lalah dug back in the crates to sing her chart-topping cover of Anita Baker's "Angel," which led into a medley of more Baker tracks that had concertgoers swooning. She flaunted her lower register and stunning range on a version of Earth, Wind & Fire's "Love's Holiday" before ending with her cover of Luther Vandross' "Forever, For Always, For Love" that made everyone within earshot fall deeper in love with her.